Going Without My Three BFFs

I had a good chuckle over today’s Joy of Tech: 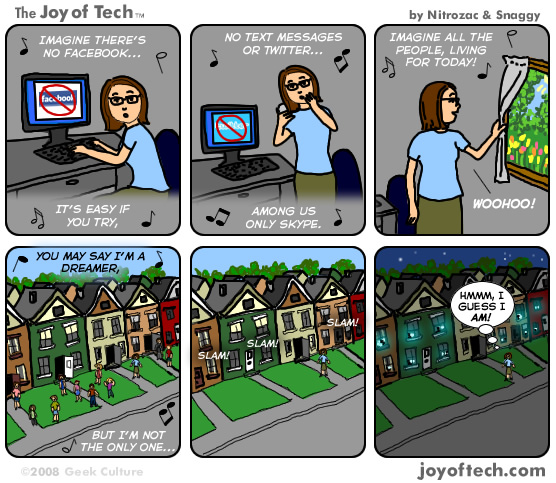 I imagined myself in the scene, and thinking about it, I probably would’ve slammed the door in her face too.

Digger deeper into the issue, I realized just how lost and frustrated I would be without my three BFFs: my laptop, cell phone, and a fast, reliable internet connection.

In fact, there was a time in the very recent past when my life was devoid of all three: the latter half of my honeymoon. My cell phone obviously couldn’t work overseas (and being CDMA, I wouldn’t have been able to use it even if I wanted to). I had my laptop, but there’s only so much you can do on a computer without internet.

The thing is, J and I are one of the geekiest couples you’ll ever meet. We have a shared love for video games, Star Wars, gadgets, and computers. Our relationship started because he had stalked me relentlessly on AIM, and he had even planned on proposing to me at the Fifth Ave Apple Store (which unfortunately didn’t work out, but that’s another story)!

I love the fact that my husband works for one of the largest, well-known internet companies in the world and he loves that through my job I get to associate with some of the brightest minds in computing. We drool over the newest and fastest machines together, and every night before we go to sleep we sit side by side on the bed with our laptops propped in front of us.

…sometimes, we’ll even talk via IM/Twitter/Facebook while sitting right next to each other.

So as you can tell, we’re not the most romantic couple in the world. We’re overly competitive (especially when playing video games) and we’re constantly making fun of each other. I like to think our relationship is very similar to that of Turk and Carla’s in this short scene from Scrubs:

Needless to say, our honeymoon didn’t consist of romantic candlelit dinners while staring into each others’ eyes.

The latter half of the trip was especially killer because there was no (cheap) internet access! I thought I was going to die. With only each other to stay entertained, I felt like our relationship was being put through the ultimate test.

In addition, when I get bored, I look at the world around me and form crazy stories and scenarios in my head using the people and environment in the vicinity. Sharing one or two of these stories was fine, but after spewing story after next, each more wild than the last, he began to look at me as if I was the clajee.

So as much as I loved Greece, I was glad to be back, in the land of easily accessible wifi and Verizon’s CDMA service.

And after just five days without my three BFFs, I don’t think I can ever lose them…I would drive myself crazy.

Screw sunshine and fresh air. I much prefer caffeine and the low hum of computers.

« The Monster Me
Roomba Love »