11 days ago, Google announced a new tool that aims to speed up the loading of websites. The new Page Speed Service utilizes the optimization techniques outlined by the company’s Page Speed Online API and takes it a step further: by rewriting pages and delivering them to users using Google’s servers.

On the Google Code blog, Google says that it has seen speed improvements from 25% to 60% on some sites. Google has a gallery and a comparison test that users can try themselves.

While the service seems pretty cool at first glance, it is not without controversy due to the fact that it requires users to point the CNAME of their URL to Google’s own servers. (Take a look at the myriads of unfavorable comments on TechCrunch‘s coverage of the announcement, for instance.)

I was intrigued by the new Page Speed Service especially because I had noticed a notable slowdown of my load speed after I had started placing ads and integrated more social media. I had even started using the W3 Total Cache plugin in conjunction with CloudFlare, but did not see much of an improvement.

So despite the controversy (oh noes, Google will own the web!), I wanted to give it a go.

The Page Speed Service is currently only being offered to a limited number of webmasters, but you can request access by filling out this form. I had no idea what the requirements are for being accepted to this trial or what percentages of websites get accepted, but I decided to bite the bullet and submitted my information.

A few days later, I received an email saying that I was in!

Setup was a bit of a pain because Google’s documentation is not too comprehensive. Additionally, I had to contact my webhost to make the final CNAME change for me because it was in a non-editable portion of my DNS settings.

But once it was up and running…

I noticed a significant improvement in my page load times.

I wish I had taken screenshots of my page load times before and after the migration…but I haven’t.

Suffice it to say that my main page load time has improved by 20-30%. And this comparison is between W3 Total Cache + CloudFlare versus Google’s Page Speed Service. (I shudder to think what it would have been without those two services.)

Additionally, while some of my JavaScript broke using W3 Total Cache + CloudFlare, I have not noticed anything of the nature with Page Speed Service.

I should note, however, that my results may not be typical. Some people even report an increase in page load times using Page Speed Service!

I would also like to see some detailed documentation on how to fully utilize the service, in addition to more stats and data collected from my traffic. This is one feature I really liked about both W3 Total Cache and CloudFlare, and I am finding myself missing it. 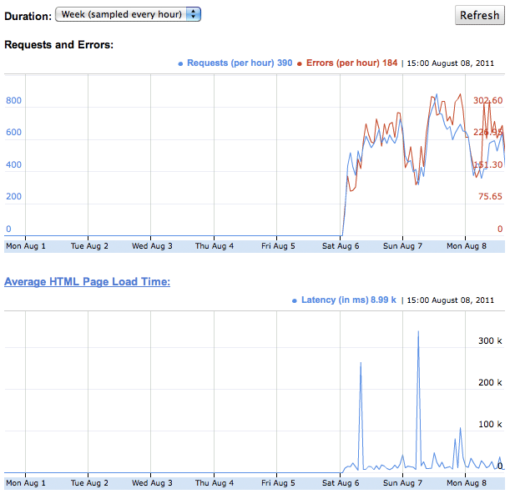 A screenshot of the Google Page Speed Service’s Dashboard. It really doesn’t
show much when compared to those of W3 Total Cache and CloudFlare.

Google says that Page Speed Service will remain free during this trial period, and that when it is finally made available to the public, its pricing will be “competitive.” And in the welcome email I received, Google tells me that once the pricing information is available, I will have at least 30 days to migrate traffic if I chose to not continue.

Seeing the remarkable improvement in my page speed, I think that I will stick with it as long as the pricing is not too unreasonable.

Has anyone else been using Google’s Page Speed Service? What are your thoughts on it?