Healing and Recovering in the Suburbs

There has been sooo much going on in my life lately that I do not know quite where to begin.

First, my neck is recovering nicely. I am still in a bit of pain but it is nowhere near as bad as it was two weeks ago, and through acupuncture and chiropractic therapy I am even slowly regaining the reflexes in my right arm!*

My chiropractor tells me that I now only need to return to him if my pain worsens. As for acupuncture, I am continuing the sessions because our focus has now shifted to lessening my stress levels and trying to reverse the physical damages that it has already caused to my body. I am taking hanyak, the Asian herbal medicine, and receiving acupuncture sessions once a week.

Both doctors have strongly recommended yoga as a form of exercise, relaxation technique, and additional therapy for my back and neck. I have always found yoga to be boring in the past (I much prefer fast, high-impact routines), but then again I have only tried it by myself at home with DVDs and I now believe that being in a class setting with a licensed instructor may be more beneficial for someone like me. As such, I will begin yoga classes next week!

How do I make time to go to doctors and yoga classes with two young kids? While it may be true that me and the girls are staying at my parents’ and have three people — my parents and my sister — around for help, they all have work too. They have been rotating their schedules so that at least one person is home with me at all times, but this can get tremendously difficult and it always does not work out. Additionally, I still hardly ever get breaks (when both doctors tell me that I need as much rest as possible) because there’s usually one adult per baby.

So we have decided to send Claire to daycare, at least temporarily. 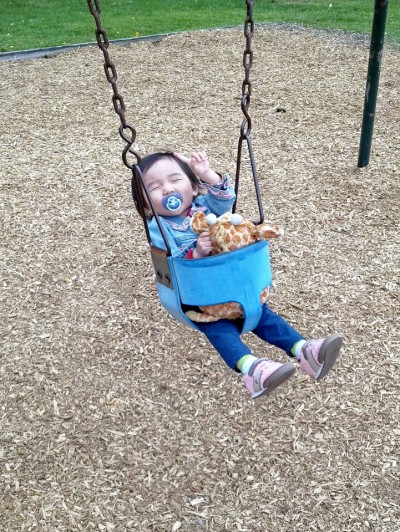 Right before I took this picture, I asked Claire, “How old are you?”

We have discovered that there is an in-home daycare just two houses down from my parents’! It has been running for over 15 years (funny how I never noticed it until now — despite my YEARS of walking and driving by it — and stupidly thinking that the people living there must be a large family) and has received pretty good reviews online.**

There are actually two facilities in our neighborhood, both run by the same woman: the first is for 3 to 5-year-olds while the other, the one that is closer to my parents’ house, is for 15-months to 3-year-olds. Coincidentally, the owner of the daycare met Claire on a walk the day before before I first contacted her, and had taken a liking to her almost immediately. She was very understanding and sympathetic to our situation, and thought that Claire would make a nice addition to her toddler class which currently consists of 10 children and 3 teachers.

So far, Claire is doing better than expected at her new “school.” (That’s what we’ve been calling it to her face, and it’s not too far from the truth because they do far more educational lessons and activities than I can currently provide for her at home.) It is undoubtedly a rough transition for our shy little girl, but we feel that this will benefit her in the long run, especially since most of the kids in her class are older than her and she can learn from them and be exposed to more advanced lessons. 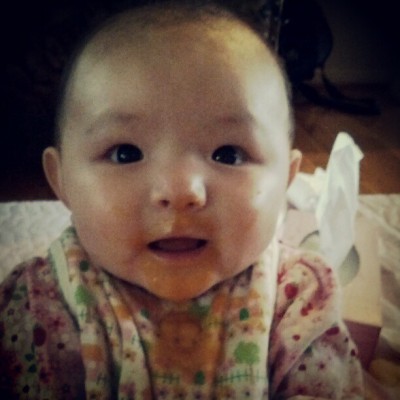 We started Aerin on solids a couple of weeks ago and she’s been enjoying
them tremendously.

Living back at home has certainly been challenging for this married-with-two-kids woman. Sure, it is the same house that I grew up in and I still feel safe and comfortable here. But it is akin to moving back in with the ‘rents after being away for college, and the past two weeks have been full of compromises and adjustments for everyone in my family. 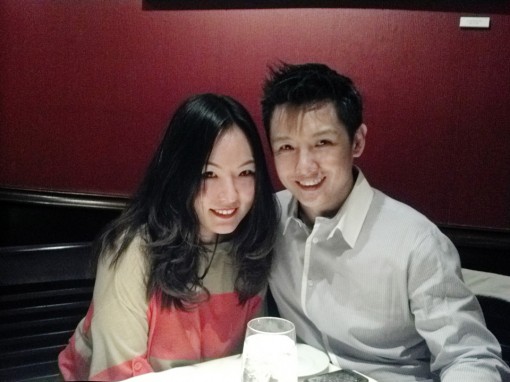 I hope to be back soon with another big announcement, but it will have to wait a few days until people are met with and confirmations made. (No, I am not pregnant.)

I hope everyone has been doing well!

*Someone recently asked me why I sought out “alternative medicine” to treat my neck injury. I wasn’t sure exactly what to tell her (I think she thought I was a complete hippie — me! Ha!) and all I could say was that it just worked out that way. I already had an appointment with the chiropractor when the pain began, and I had already been going to the acupuncturist thanks to my parents’ urging. And since sessions with both “doctors” (I know some do not think chiropractors and acupuncturists are not really “doctors” but I call them that because they both have medical degrees) were tremendously beneficial, I saw no need to seek out another.

**It may be bad manners to talk about money, but I have to add that daycare out here in the suburbs is almost half the price of what they charge in our neighborhood! AND they provide two meals and a snack!

7 Responses to “Healing and Recovering in the Suburbs”