Let Me Sniff Your Stinky Paws

This post is dedicated to my sister, with whom I have had many conversations about how we love to sniff our dogs’ stinky paws.

I’m sure that all dog owners can agree: there is a certain (irresistible) aroma about our furry friends’ paws.

It’s not a bad scent, per se. The closest description I’ve heard is “corn chips.” Except you know how when you apply self-tanner and end up smelling like corn chips?…This smell is better than that. It’s more of a satisfying, settled smell. 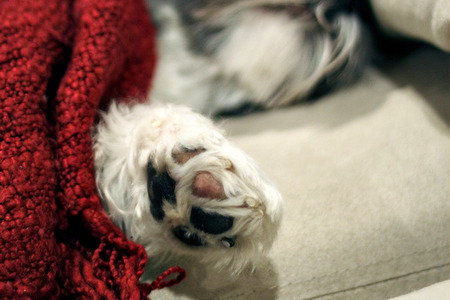 Today, I learned that there may be an explanation for “Frito feet” (as the author affectionately calls the phenomenon):

Bacteria and yeast naturally reside on the skin of all animals, including cats and dogs. The feet of both species contain many folds and pockets, such as the areas between toes and the spaces between the foot pads. These areas have increased levels of moisture and decreased air circulation at the level of the skin.

The increased moisture and decreased air circulation in these environments enables the resident bacteria and yeast to proliferate exuberantly. These micro-organisms give off odors, and I suspect that they are the cause of Frito feet. Because cats groom themselves more thoroughly than dogs, they are less likely to have foot odor.

One bacteria in particular is famous for smelling like corn tortillas. That bacteria is called Pseudomonas. It is often associated with skin or ear infections, and I can’t promise that it has anything to do with causing Frito feet. But I am a bit suspicious.

See, not all stink-inducing bacteria is bad! And seeing as it only encourages me, along with other dog owners, to purposely position our heads near our napping friends’ paws in order to fully take in that calming scent, who is to judge our pets for being a bit dirty? (Or judge their owners for prolonging that bath one extra day?)

Let’s hear it, folks. Does anyone else love to sniff their dogs’ paws?

14 Responses to “Let Me Sniff Your Stinky Paws”