After much consideration and thought, we have decided to give away Comang, our beloved shih-tzu.

When I first became pregnant with Claire, I swore to myself that I would never become “one of those people” that give away their dogs after having children. I consider dogs — all pets, actually — part of one’s family and I still consider Comang to be J and my first child. And while it was difficult at times, we managed to successfully take care of both a baby and a dog after Claire was born. We would walk Comang with Claire in a stroller or in a carrier. We would devote our full attention to Comang once Claire was asleep. And while he would seem jealous and even a bit sad at times, we believed that this adjustment period would be temporary, and that Claire and Comang would grow up to be great friends.

Then I unexpectedly got pregnant with Aerin just 3 months after Claire was born. I had an extremely difficult pregnancy with Aerin, so Comang was forced to take the back seat more and more frequently. He began to get moody. He gained weight. And I knew that he was not nearly as happy as he was before.

Comang has been spending the majority of the time at my parents’ house since Aerin was born. And while they are glad to help take care of him, they are away from home 14 hours a day and he — a dog who loves and craves attention and interaction — became even more surly. I wanted to take him back full-time, but I can barely take care of both girls as it is…there was no way that we could add a third “child” into the mix without my going completely bonkers.

We also had to consider the fact that Aerin has extremely sensitive skin — although shih-tzus are generally hypoallergenic, all dogs carry small amounts of allergens or can pick up allergens from outside in their fur, and each specific dog within a breed may cause different allergic responses. We have never gone as far as to actually rub Comang up against Aerin, but I did notice that every time that I held her after having had some contact with him, she seemed more itchy and her eczema would flare up.

So with a heavy heart, I posted an ad on Petfinder, a site I had used in the past and knew for a fact to be adoption-friendly with the animals’ best interest at heart. 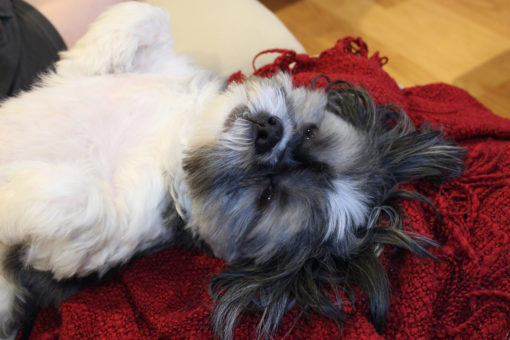 This is how I will always remember Comang — lying next to me with his paws in the air.

As I have written many times in the past, Comang is one of the best-behaved dogs I know, and no one can deny that he is adorable. Requests began to pour in, and I was eventually able to find a family I knew would give him a great home.

Comang’s new family has three boys, ages 3, 5, and 7, and the mother is a SAHM so I know that someone will be around to keep Comang company at almost all times. I was a bit worried that the boys would be too rambunctious and/or even violent for our timid little guy, but they were all very well-behaved with great manners, and were absolutely smitten with Comang. The oldest had actually been saving up his chores money so that they could get a dog, and paid for the adoption fee himself! (Petfinder requires an adoption fee in order to help ensure that the pets will be going to good homes.) I spoke at length with the mother and it was apparent that this family would be able to give Comang all the love and attention that he deserves. In fact, they asked sooo many questions about him that it even bordered on being annoying at times!

The family was willing to sign an adoption contract I drew up, which included a stipulation stating that if, for whatever reason, they were no longer able to take care of Comang (whether one month from now or 10 years from now), they would return him to us. They also agreed to periodically send us emails and pictures with updates. And when we met in person, they even invited us to come visit them anytime we want!

The decision to give away Comang was obviously one that we did not not come to easily. But knowing that he is going to such a great home made the process that much easier. I wanted to cry when Comang’s new family came to pick him up yesterday, but seeing how happy the boys were put a big smile on my face instead. I felt even better still when, before we headed to bed, I received a text message with a picture of Comang in his new home with a note thanking us for making them so happy.

« 1 to 2 Transition: Things We're Doing Differently
Reverent Sunday: The Books of the Bible... »