Level II Ultrasound (And Some Blood…)

Today J and I trekked down to the hospital for our Level II Ultrasound. We were excited to see BebeDeux again, but more excited to definitively find out the gender of our impending one.

BebeDeux was not cooperative right from the get-go. The ultrasound tech actually told us that just from the way the baby was moving, she would guess that it is a girl — from her experience, boys tend to be a lot more cooperative during their Level II Ultrasounds. (Any of my mommy readers care to confirm her observation?)

We ended up pausing twice — the first time for me to gulp down some cold water, and the second time for me to walk around a bit — just to get BebeDeux in a more favorable position. But the more we tried, the more that BebeDeux would do the opposite of what we wanted.

“This baby…” the ultrasound tech muttered on more than on occasion while shaking her head.

An hour and a half later, we were finally able to get all the images and measurements that the technician needed…including the money shot.

Our OB was correct — BebeDeux is a girl!

And here are the pictures we received…

Can you spot the thumbs up? 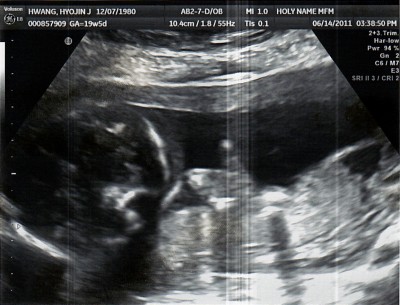 Her feet went from being near her head to behind her head. 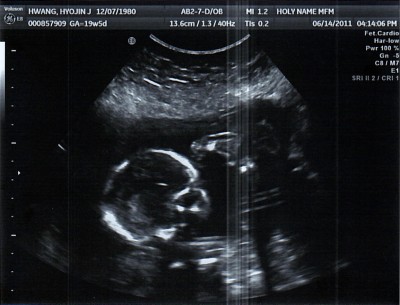 A 3D image of her face. This isn’t the best shot, but there were
moments when I swear she looked exactly like Claire. 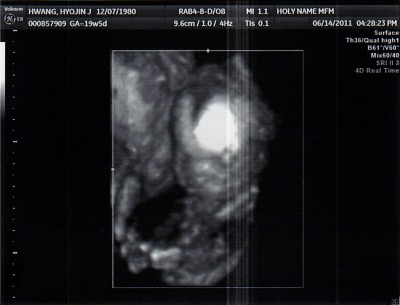 A profile shot. Her nose seems more upturned than Claire’s. 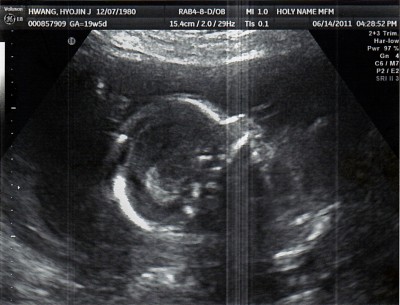 I have NO idea what this is. Can anyone venture a guess? 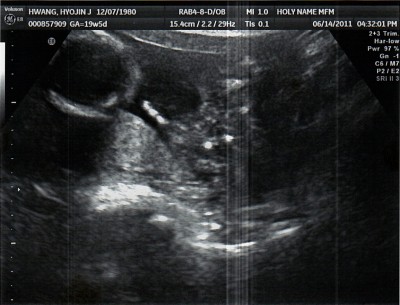 The money shot. Can you see it? The three dots in the middle? 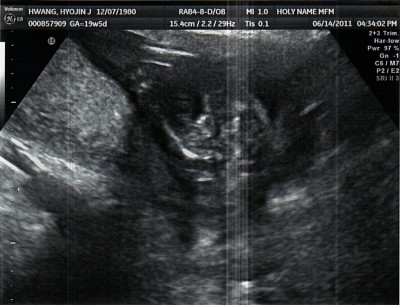 Legs! (And you can see her head behind her legs!) 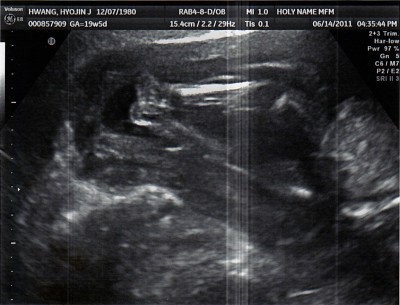 My favorite one of the bunch. 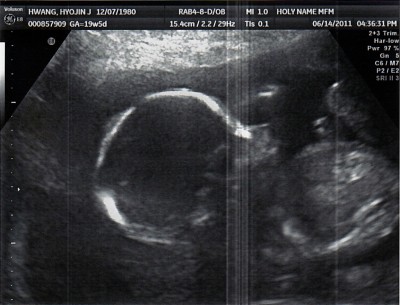 The tech was really nice and tried her best to get us some good 3D images of
the baby’s face. No luck. She either kept pressing her face against the placenta… 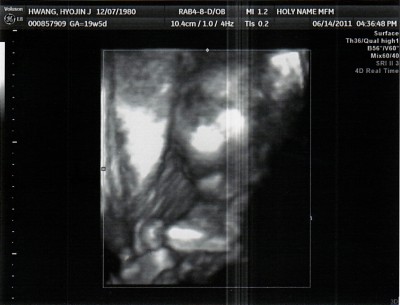 Or she would try to cover her face with her arms and/or legs. 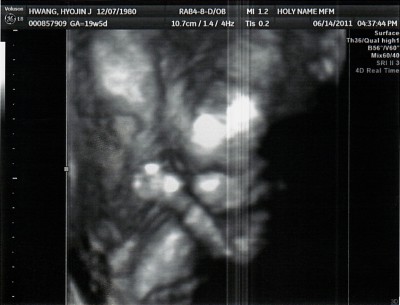 I thought that all the poor-quality ultrasounds I had gotten — with my previous pregnancy as well as this one — were due to old machines, but apparently that is not the case. The ultrasound tech asked me at one point if I am an avid athlete, or if I do tons of crunches every day. When I replied no (I haven’t done a single crunch since I first got pregnant with Claire), she sounded surprised and said that I have very strong, thick abdominal muscles…and that’s the reason the ultrasound images are so blurry. Good to know! (And perhaps the reason I was able to deliver Claire so easily?)

We returned home in good spirits and began to spread the news that yes, it has been confirmed that BebeDeux is a girl. We had dinner, put Claire to bed and were set to relax for the evening…

…then I made a trip to the bathroom to find (TMI alert!) a huge glob of bloody mucous in my underwear.

I had experienced some bleeding last month, so I wasn’t too concerned at first. But then I remembered that last month’s bleeding was just blood, while this time was bright red blood mixed with mucous. I knew that it couldn’t be from the ultrasound, since everyone was done abdominally and not transvaginally. I also recalled that I had cramping all day yesterday, which I had just chalked up to expanding pains.

I then realized why I was so uneasy — this was exactly what my mucous plug looked like before I went into labor with Claire!

I immediately called our doctor’s messaging service and waited around for the on-call OB to return my phone call. After some precursory questions, the doctor told me to get lots of rest and to come in for a checkup if the bleeding continues through the night.

J has ordered me to bed and I am praying that all is well. I am experiencing some cramps again, but I can’t tell if it is psychosomatic or not.

It’s going to be a long night.

5 Responses to “Level II Ultrasound (And Some Blood…)”