This past week was a big one for us Star Wars  fans.

Even if you’re not into the greatest sci-fi franchise ever created, you may have heard about a certain comic book already breaking records before its official release date.

So with Star Wars being such a popular franchise — and because Marvel’s acquisition of the comic book rights is such a big damn deal (previous Star Wars comics were published under Dark Horse) — it seemed that every major variant artist, comic book store chain, distributor, etc. was clamoring for its own exclusive cover…resulting in 69 different cover variants (as of this writing).

Here are my favorites. Aren’t they fantastic? And I’m sure my fellow female fans will find the Kings Comics variant by Joe Quinones — where Leia carries Luke as they swing their way to freedom — particularly satisfying.

(You can see this cover at the bottom left of the matrix below.)

And because I am such a devoted fan, you can bet your arse that I managed to get my grubby hands on a copy on launch day.

Correction: I managed to acquire 10 different variants on launch day.

Of course I wanted more (ideally, all of them!) but depending on the availability, some of the variants cost hundreds of dollars. 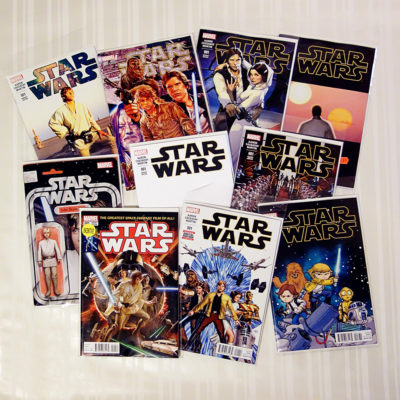 The Skottie Young variant even came with a print! 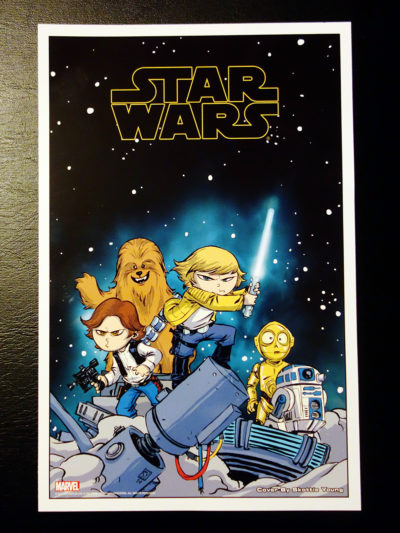 Look how happy I look with my favorite cover by Alex Ross! 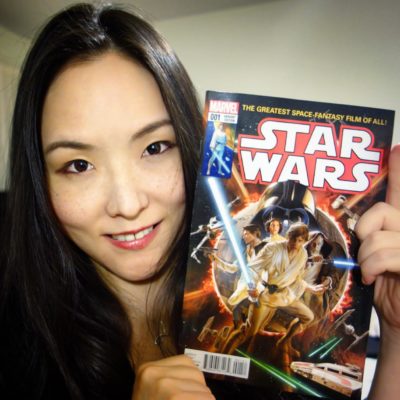 Are you still there? Because I’ve got more! Two days after gingerly touching each comic and reading it cover-to-cover 3 times in a row, I trekked to Midtown Comics Downtown to meet Jason Aaron (author) and John Cassaday (illustrator) and got their autographs!

I still can’t believe I stood in line for almost 3 hours in sub-30ºF (that’s -1.1ºC for you metric folks) temperatures with biting wind to get these autographs. My neck and shoulders are still sore from being scrunched up and shivering for so long!

But it was sooooo worth it. 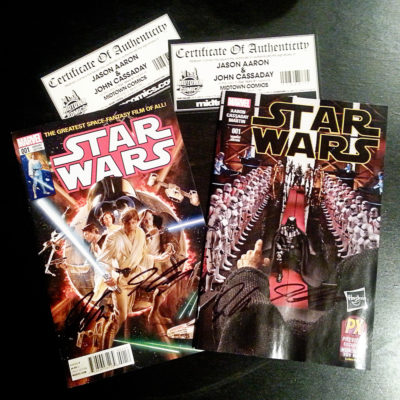 And look at all the free swag I got from Midtown Comics! 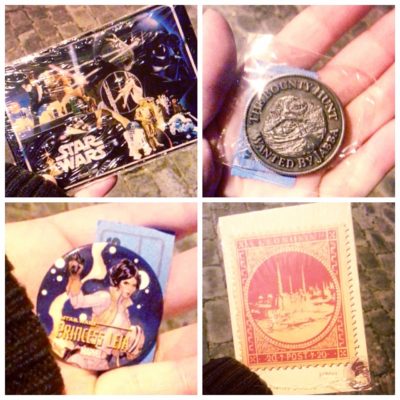 Not to mention, being in a line full of Star Wars nerds who were clearly as — if not more — enthused as me by the momentous event. A small group of your typical sci-fi/comics nerds stood right behind me in line, and I truly enjoyed eavesdropping on their conversations. They formed intelligent (albeit nerdily obsessed) discussions about my favorite Marvel and DC characters. They exchanged theories on popular cliffhangers, such as Arrow‘s winter finale cliffhanger. And, of course, they debated various Star Wars issues, questions, and areas of contention.

I was with my people.

But back to Star Wars #1. Marvel (and Disney!) did a marvelous job with this first issue. This new series is set between episodes IV and V, and is meant to be canon, not just another supplement to the Star Wars expanded universe. You can read a fantastic article titled “Why Marvel’s New Star Wars Comic Book Series Matters” over at /Film.

I personally can’t wait for the next issue — not only because this first book ends with a cliffhanger (don’t they all?), but also because from what I’ve read, it will only continue to get better from here.

And this new series will certainly whet my appetite for Episode VII.

« I've Been a Bad, Bad Blogger
Will You Still Love Me Tomorrow? »