Our Family’s First Trip to the Beach

…was a big fat FAIL.

This past Saturday, J and I loaded up the car, strapped both girls into their car seats with me sitting uncomfortably between them, and drove a little over an hour to Long Island for a day at the beach with family and friends.

I was admittedly uncomfortable with the idea of bringing Aerin to the beach because she tries to put everything into her mouth these days — even my nose! — but J assured me that he would take care of her while I watched Claire.

Anyway, back to the story. We had purposely left an hour after everyone else so that the car ride would coincide with the girls’ nap times. We figured that the girls would zonk out soon after we hit the road, and that they would be refreshed and well-rested when we arrived at the beach.

Silly rabbit, Trix are for kids.

The girls refused to fall asleep almost the entire ride, only dozing off a mere FIVE MINUTES before we arrived at our destination.

We decided that I would stay in the car with the girls while J took our bags to go find the others.

Did I mention that this day was one of the hottest days of the year with temperatures reaching 101° (they estimated that it felt like 105° when you factor in the humidity) and that Long Island is where most people residing in the NYC area choose for the beach? Add to that it being a Saturday…there seemed to be thousands of people lying out in the sand. 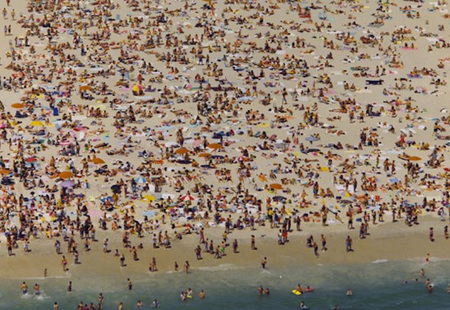 Jones Beach, where we spent Saturday morning ~ afternoon.
Only it was more crowded than this picture which I found here.

J returned 20 minutes later — just as Aerin began stirring from her nap — and announced that he was unable to find the others. We had been told to make a right from the parking lot and meet them in the BBQ area, but he couldn’t find a BBQ area. He had lugged our bags up and down the beach and through the boardwalk in search of the missing BBQ area for 15 minutes under the blazing sun. When he finally asked a lifeguard for help, he was informed that we were supposed to make a left from the parking lot, not right.

So we woke up Claire, loaded both girls into the stroller, and made a left from the parking lot toward the BBQ area.

The only problem was, our friends and family were not there.

J called his cousin to confirm that we had to make a right from the parking lot. He also discovered that they were at the end of the boardwalk.

So we began the slow trek down the half-a-mile-long boardwalk. It was hot, we were sweaty, and the girls began to fuss.

We decided to take a break in a shaded area in order to change Aerin and give her a bottle, give Claire a juice pack from the cooler, and slather on sunscreen. After this short break, we headed down the boardwalk again, and began to make out some BBQ stands and picnic tables in the distance.

But the area was completely empty.

J once again called his cousin who repeated the same set of directions. “We’re right by the golf course. You can’t miss us,” he said.

“Yeah, we’re at Field 2. We see a couple of softball fields, but no golf course.”

By this time, both girls were wailing. They were obviously uncomfortably hot and bored and did not hesitate to let us know.

We turned around and headed back where we came from, keeping our eyes peeled for the elusive golf course. We were all tired, hot, and cranky. I suggested that we should just settle down — just us four, and have a family day at the beach.

But there were sooooo many people on the beach and the water was quite far from where we were.

We had been walking around, under the blazing sun, lugging our bags and pushing the stroller for over an hour by this point. The girls were now practically screaming.

Then J said what I had been thinking: “Oh, the hell with it. Let’s just go back home.”

I waited in the rest area with Claire and Aerin, sharing a soft-serve ice cream with them while J left to go get the car. As we left the parking lot, J called his cousin to let him know we were leaving.

It was only then that we figured out the problem:

WE WERE AT THE WRONG BEACH.

It didn’t matter where the misunderstanding/miscommunication had occurred, and by whom. J’s cousin urged us to drive down to the correct beach, but we were all too exhausted and cranky. We continued on our way home.

J and I could only laugh about it on the drive back. “At least we got some sun!” “Well, we were technically at the beach…” “Aerin had her first taste of ice cream and she loved it!”

How was your weekend? I hope it was better than ours!

« Then & Now: The Real-Life Values of Monopoly...
Famous Logos: Original vs Current »

8 Responses to “Our Family’s First Trip to the Beach”