A few weeks into pre-k, Claire began to tell me about a new friend.

“Look, umma! JJ made me this drawing!”

I soon discovered that JJ was a kindergartener (so about a year older than Claire) whose Korean name initials are JJ. Whenever I arrived early for pickup to see Claire’s class returning from their afternoon walk, I’d see Claire and JJ walking together, often holding the same ring on the walking rope while giggling and chatting with each other.

I was glad to see that Claire had made a close friend. I knew she was friendly with the kids in her class, but this was the first time that she would voluntarily talk about a friend every day and say things like, “I miss JJ” on the weekends when she didn’t have school.

However, it bugged me a bit that JJ was Korean. Because Claire’s school isn’t too ethnically diverse, I was a teeny bit concerned by the fact that her first close friend was one of the few Asians among her peers. Is this a form of racism on my part? I dunno.

Nonetheless, I didn’t want my (possible) flaw to get in the way of a naturally blossoming friendship. The above was just a fleeting thought, anyway. 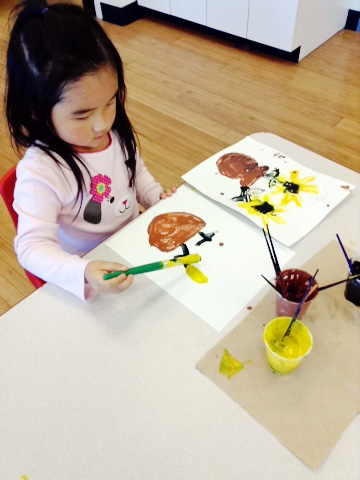 One day during pickup, I overheard JJ’s mother speaking to her in Korean. So I asked Claire if she and JJ speak to each other in English or Korean.

When I asked her if the other kids in their class think this is strange, she told me that she and JJ think it’s fun to talk to each other in a language no one else understands.

A couple of weeks later, Claire began to talk about a new friend: David. It seemed that she, David, and JJ often play together.

I asked Claire’s teacher to point out David for me, and it turns out that David is half-Korean who knows Korean as well!

I am well aware that more often than not, we, as humans, naturally tend to gravitate toward those who are of similar ethnic backgrounds. After all, we usually have more in common with them, no? I also remember reading studies that find ethnic minorities to experience this kind of racial affinity more strongly.

As usual, I’m probably overthinking my daughter’s choice in friends. They could just think it’s fun to speak to each other in Korean, and that may be it! But it’ll be interesting to see how this develops as Claire — and Aerin! — get older.

Unfortunately, there is no one in Claire’s class who speaks Cantonese. Now that would be fun to observe!