A few months ago, at about 17 months of age, Aerin came down with a bad cold. Just a few days after recovery, she developed roseola…and a week after that, she got an ear infection.

All in all, she was sick for the majority of a month.

As one might expect, she lost a ton of weight (she went down to the 11th percentile in weight from the high-thirties) and did not grow at all vertically. My mother would joke that she looked like a “불쌍한 애” (loosely translated, a kid to be pitied) because her cheeks were so sunken and all her clothes were hanging loosely. 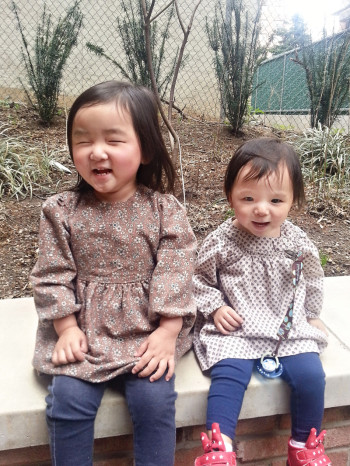 This picture was taken AFTER she gained back some weight!

As most mothers in my situation would do, I did not concentrate much on Aerin’s verbal development during the time she was sick. And in the following month, I was so hell bent on trying to get her to gain some weight and stay healthy — being able to see her ribs was breaking my heart — that once again, I did not worry too much about her lack of spoken words.

When Aerin was 18 months old, our pediatrician asked how many words she knew (a routine question at this age). The answer, which was 10, was definitely on the low range. But we recalled how Claire, at the same age, only knew a dozen words….only to have a language explosion a few months later and now speaks three languages comfortably.

Keeping in mind that we’re a multi-lingual home, and the fact that Aerin had been sick for a prolonged period of time in the previous month, we decided to take the “wait and see” approach.

Aerin is now 19 months old, going on 20 next week. And the number of words she knows has not changed.

In fact, I have been noticing other troubling signs… 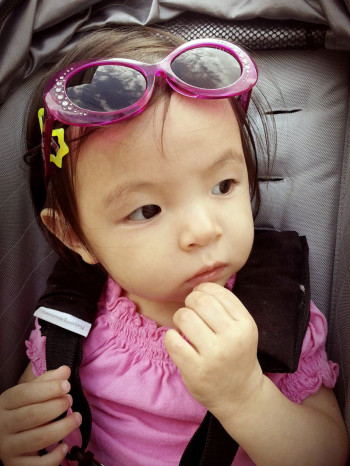 She rarely responds when we call her name. Oftentimes she seems to be in her own little world, and we have trouble getting her attention even with physical touches. She doesn’t like playing with other children, and she is very attached to me. She is constantly moving.

She prefers to destroy rather than build; I have yet to see her stack even two blocks on top of each other. She regularly takes a small group of objects, usually cornering them against our sectional, and throws them against each other.

She absently taps and scratches at the surface of whatever she’s touching. She routinely walks on her toes.

It seems to me that along with the speech delay, Aerin is exhibiting some signs of autism.

On the other hand, she knows the purpose of certain objects like balls and toy cars. (And sunglasses, as you can see in the picture above. She wears them normally or perches them at the top of her head depending on her mood.)

She can point to basic body parts when asked. But then again, she has to be in the right mood for this, which isn’t often, whereas with Claire she would do it almost always at this age. And she knows to wave and say “bye” and blow a kiss goodnight.

She does not have any OCD tendencies (if anything, Claire is the OCD one in the family), nor does she engage in rocking or hand-flapping. And she is definitely starting to learn how to play with different toys a lot faster than she has ever been.

But then again, every kid is different, and each autistic child displays a different set of symptoms. And practically every parent of an autistic child says that they knew something was wrong, despite what others said.

Am I just being paranoid? Perhaps. J thinks that Aerin is just a bit delayed and that we shouldn’t worry. When I begrudgingly brought up my concerns to my mother (because I was afraid she’d freak out), she said that she can certainly see how Aerin is developmentally slower than other children her age…but now she’s concerned too, because she sees what I’m talking about! 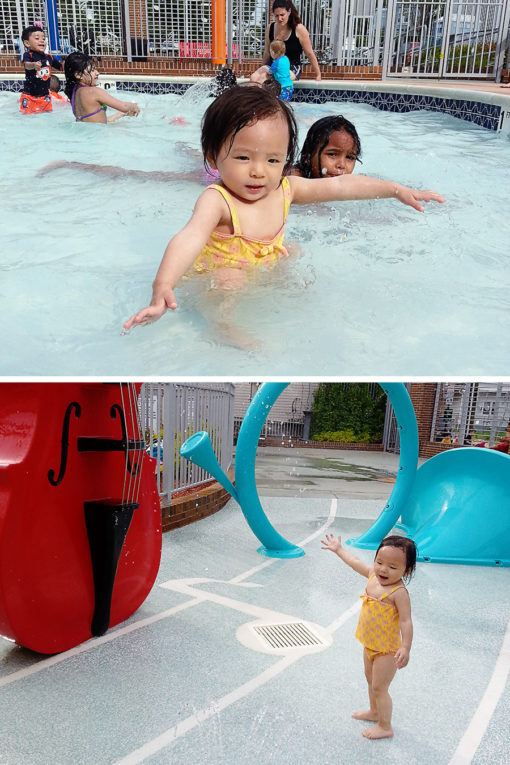 I know that every parent becomes concerned about autism at at least one point in their children’s lives. Heck, I know I certainly had my scares with Claire; she started organizing and sorting objects by color, shapes, and such at a very young age. She’s also keen on developing specific routines and rituals, and gets upset if they are disturbed.

J also pointed out that Claire was also very antisocial at Aerin’s age — something that had completely slipped my mind — and if anything, she was probably worse, because she’s always been much more cautious than Aerin.

But now we know that these quirks are all just part of Claire’s personality. She is a healthy, thriving, smart (sometimes a little too smart for her own good) little girl.

Despite all this, I want to get Aerin checked out. We have an appointment with her pediatrician on Tuesday, and I will be bringing along my list of concerns. However, I know that the doctor will most likely refer us to a specialist and we will still have some time to wait until we know for sure.

No matter what our pediatrician says, I want to get a referral for a speech therapist at the very least. (Although the diagnosis may be a bit difficult as I speak Korean to Aerin and the speech therapist will mostly speak English to her. Does anyone know how this would work?)

It’s natural for parents to want the best for their children, and I’m no exception. But despite the increased awareness of autism and the advances our society has made in recent years — learning more about the condition, making increased accommodations, widening the availability and types of programs available for help and support — I doubt that any parent has ever wished for their child to be autistic.

Or to have speech and/or other developmental delays.

I know that I would love Aerin no less if she were diagnosed with autism or a delay. But I also know that our lives — individually and as a family — will become more complicated and probably more difficult with therapy sessions and such.

And hey, I’m human. I want the easier route.

Then there’s the guilt factor too. Did I somehow contribute to this?

Please keep us in mind in the next couple of weeks…