I am currently writing this on my phone while lying in bed at the hospital.

Early yesterday morning I woke up to excruciating abdominal pain, similar to the severe round ligament pain I had experienced during my pregnancy with Claire. With this pregnancy being so similar to the last, I had believed myself to have been lucky to have been spared such dramatic afflictions, but I was wrong.

When the pain level reached that of labor pains, J called his brother to come watch Claire so that we could head to the hospital. Being 25 weeks pregnant, I was admitted to Labor & Delivery right away. The pain continued to grow worse, but BebeDeux seemed to be in good condition. 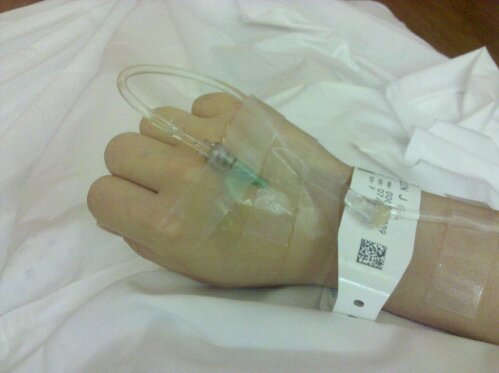 Soon, the pain became almost unbearable. I could not walk or talk, only rock back and forth with tears streaming down my face. I began to vomit and shake uncontrollably. My OB prescribed me some morphine, but that would only provide me about an hour of relief and then the vicious cycle would begin all over again.

It was the worst physical pain of my life.

This was not round ligament pain, like last time. Neither was I in premature labor (and with labor pains, I would at least get some relief between contractions while this pain was continuous).

The doctors were perplexed. All my bloodwork, abdominal ultrasounds, and other pregnancy-safe tests came back normal. But after about the 9th hour of this agony, they decided that an MRI was needed. There were some risks to the baby, sure, but they just could not figure out what was wrong with me.

I fervently prayed that the MRI would show what the other tests did not, and it did…

I needed surgery asap, before my appendix burst.

My OB, surgeon, and anestheseologist all assured me that the procedure would be safe for BebeDeux. And that the small risks involved with the surgery were nothing compared to the risks I would be taking by not getting my appendix removed and quite possibly have it burst.

A couple of hours later, I gave J a kiss and told him I loved him while getting wheeled into the OR. And an hour after that, I woke up to my surgeon informing me that the surgery was a success, and that my inflamed appendix was now no more.

So here I am now, back in the maternity ward, recovering from surgery while they monitor BebeDeux. She seems to be handling it a lot better than her mama, and I am forever grateful for that.

Depending on my progress, I may be discharged as early as today. Be that as it may, I can’t help but be worried about the upcoming week or two as I continue to recover and have little Claire to take care of…J will most likely need to work from home many days, and/or our nanny will need to come in for extra hours.

Please keep our family in your prayers as we recover from yesterday’s surgery. I hope that you’re all having better weekends than me.

« Anticipation & Expectations (Movie of the Year?)
Healing, and Thank Yous »