I always have a television show on queue to watch whenever I get some downtime and need to zone out, or when I am having trouble falling asleep.

And these days, that show has been The Wonder Years.

(Never watched The Wonder Years? Go do it now. It’s on Netflix streaming!)

I have watched and enjoyed the entire series when it first aired between 1988-1993, and re-watching it now, twenty-or-so years later, I still love it the same for its nostalgia, sentimentality, humor, and ageless themes of love, friendships, and family.

I have rooted for Kevin and Winnie as a couple since I watched my very first episode, and remember being sorely disappointed to discover that, on the very last episode, they ultimately do not end up together.

But nevermind that. Because their relationship is one that spans the entire six seasons of this classic drama. It is one that started as childhood sweethearts — one that you can’t help but want to see work for its feel-good values. 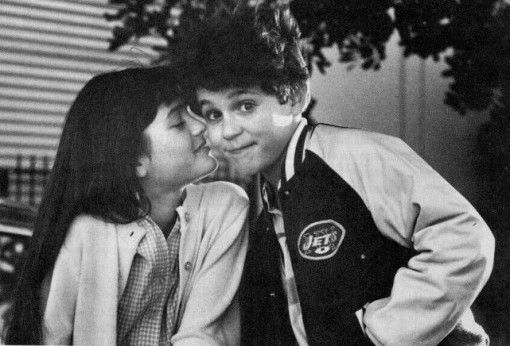 It is one that started with a first kiss at the age of 12, which seems to be about the average age at which most of my friends experienced their first kisses too. An age when holding hands in the hallways at school was the most that couples did, and even the mere mention of going past “first base” would be met with astonishment.

(Yes, I know that things are different now, that many kids are already having sex at the age of 12. But bear with me here as I take a trip down nostalgia lane…)

However, I am saddened to say that this wasn’t the case with me.

My first kiss was not until the age of 17. With a boy who charmed me probably just to get in a make-out session, who cut off contact with me not soon after.

(But I have to admit that he was damn cute.

A young boy whom I had met at the mall where I worked, he looked like the Filipino version of a young Robert Downey Jr.)

And because my first kiss arrived so late, at an age when many of my friends had progressed way past the kissing-only stage while some had even lost their virginities —

I am sorry to say that I never experienced this puppy love phase. This “Kevin and Winnie” phase.

Sometimes I look back and become sad that I never did. I almost feel like I missed out on an integral phase of childhood/early teenage years.

But at the same time, I am glad that I didn’t have a relationship to distract me from my overly ambitious studies and extracurricular activities, because otherwise, I probably wouldn’t have been able to have gone to a good school.

How about you? When was your first kiss? Did you have a childhood sweetheart?

14 Responses to “The First Kiss”