Disclaimer: I love my children. I am not suffering from post-partum depression. I am well-aware that my current life circumstances all stem from choices I have made. I know that there are tons of families who would kill to have two healthy babies.

But everyone needs a gripe session once in a while, don’t you agree?

This is a warning to the readers who lurk in the shadows and pop in once every blue moon to call me selfish, immature, and overly dramatic.

Because yes, this is one of those “woe is me” posts.

And because I get far more comments from those who support my “tell it as it is” posts.

So what is it I want to confess?

Life with two babies who are just 13 months apart is very, very difficult. This past month and a half has been the most taxing period in all my life. I seriously don’t know how I would survive if I didn’t have the help that I do.

And in this overly fatigued, overly sensitive and fragile state, the green-eyed monster inside of me can’t help but rear its ugly head… 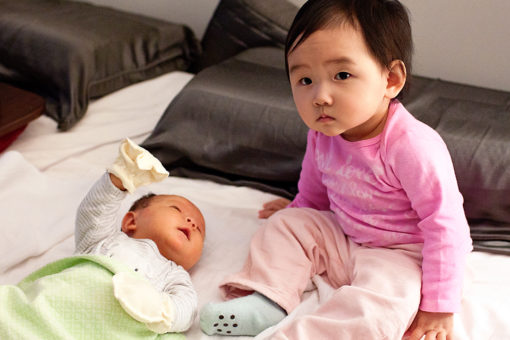 I get insanely jealous whenever I hear about easy, mellow babies.

For I, mother of two, have been blessed with two difficult babies.

Yes, I have stated in an earlier post that Aerin seems easier than Claire. But did you notice that was a comparative statement? Just because she is easier does not mean she is easy. And if you can recall, she may just seem easier due to our more relaxed attitudes.

She still has yet to sleep longer than a 3-hour stretch. Even 3 hours is a luxury, because most of the time it’s only 1-1.5 hours. She has to be held at all times. She will only sleep next to me or on the swing.

I have also held off on taking pictures of her as of late because the skin on her face is a mess: a combination of eczema, heat rash, and baby acne.

Claire has never had any skin problems, so to be hit with three different issues at once with Aerin is a bit daunting. (And yes, I have been rubbing breastmilk on her face, doing my best to keep her clean and at a comfortable temperature, and spot-treating the eczema with Aquaphor. It hasn’t gotten much better.) 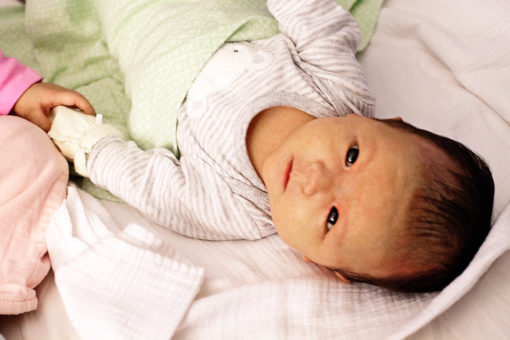 You can KINDA see the problem skin in this picture.
(Also note that Claire is holding Aerin’s hand!)

I also get jealous of parents whose children’s age spacings were planned. Or even parents who have at least 1.5 years between their children. Whenever I hear or read, “Having two under 2 is sooo difficult!” I want to retort, “How about two just 13 months apart? And the first is still not walking so both need to be carried?”

I even look to mothers of twins with some envy, because at least their kids are developmentally at about the same stage. Having one who is just about to start walking and just entering toddlerhood, in addition to a newborn who needs all the extra care that a brand-new human being requires, is not only physically tiring, but mentally exhausting.

And whenever both of them are crying at the same time? Sigh.

I have mentioned in the past that I feel physical pain when Claire cries. The reaction hasn’t changed with Aerin, and it’s doubly worse when both are wailing.

I now tell all my friends to space their kids by at least 2 years.

As for us? Once again, the mantra is “one day at a time.”

And, the moments here and there when we see the sisters interacting. (Actually, it’s Claire who does all the interacting because Aerin is still too young.) Like when Claire calls out, and looks for Aerin every morning. Or the other day, when she picked up a blankie, “walked” (J helped her along when she wasn’t supporting herself along furniture) over to Aerin, and placed the blankie on top of her sleeping sister. Or when she sees Aerin on the swing and insists on rocking the swing herself. Or when she tries to feed Aerin by shoving bottles in her face.

Yes, those moments are pretty wonderful.

27 Responses to “The Green-Eyed Monster”