Toilet-Training Claire [Or, How We Completely Lucked Out]

As is the case with most mothers, my parenting style has really loosened up with time and the addition of another kid.

Minor injury? Eh, they’ll live. No clean clothes left in the drawers? Go to the hamper and sniff out something presentable. Dead-tired at the end of the day without much food in the kitchen? Special K with whole milk for dinner!

I always thought I would be diligent — if not my usually neurotic self — about potty-training Claire, but I surprised even myself by being so lax about it.

Contradictory to my nature, I didn’t do much reading about potty-training; I asked my mother and MIL how they toilet-trained us, and they both replied that whenever we notice Claire pooping, to sit her on the toilet right away so that she’ll get into the habit. They told me that since pooping is easier for us to notice than peeing, we should poop-train her first.

Is this how Asians usually potty-train, or is it unique to our family? Additionally, is this contrary to the Western method of toilet-training? (Every other mother I’ve talked to tells me that they did both pee and poop at the same time, or they did pee first.)

We purchased the popular BabyBjörn® Toilet Trainer and got crackin’ right away. Claire got the hang of it almost immediately — my mom says that practically everyone is uncomfortable with the feel of poop against their skin — and was poop-trained for a couple of months before we decided to move onto the yellow stuff. (In hindsight, we probably could have started to pee-train earlier, but life was a bit too hectic at the time.)

Before we began to pee-train, I prepared by purchasing some puffy stickers from the dollar store and a bunch of panties I knew Claire would love: a 6-pack of Minnie Mouse, a 6-pack of Hello Kitty, and a second set of Hello Kitty since she was just starting to get into the popular feline.

I knew that the pretty undies would entice her, and I was right. She wanted to try them on right away, but I told her that she can’t wear her diapers if she wears the panties, and that with panties she should tell me if she needs to pee.

I also showed her the stickers and told her that I’ll give her a sticker if she pees in the toilet. She wanted to sit on the toilet right away and made a pushing face, trying to make herself pee.

Nothing came out, but I was proud of her for trying and gave her a sticker anyway.

Her being a neat freak and a people pleaser (just like her mama) really worked to our advantage here because she would get upset whenever she wet herself. I took the accidents in stride and told her, “See, this is peepee. You want to peepee in the toilet” as I sat her on the toilet regardless of she needed to pee more or not.

On the second day, she was able to hold it in long enough for me to get her to the toilet without any spillage for the very first time. And by the third day, she was about 75% pee-trained!

My BIL thinks it’s hilarious the way we pee-trained Claire, because his sister had taken her son to the toilet every 90 minutes (using a stopwatch!). “So you just told her to tell you when she has to pee…and now she’s potty trained after just one week?” He was amazed that one day, she was still wearing diapers and exactly 7 days after that, she was diaper-less and ran up to him to say, “Andrew! Peepee!” when she had to go.

We’ve since purchased the Prince Lionheart PottyPOD so that she can get used to going by herself (we have a step stool in the bathroom, but she’s such a cautious little girl that she doesn’t like to use it to get on the toilet). It was voted one of Babble’s Best Training Potties and I especially love that it has a soft splash guard that you can flip “on” or “off” (the splash guard is “activated” on the blue potty below). 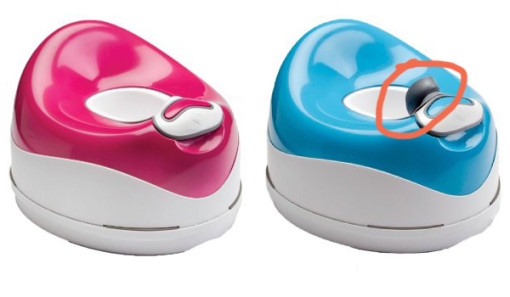 Another nice feature is that it has two height settings so it can grow with your kid!

I wouldn’t say that Claire is completely potty-trained. We still have her wear pull-ups at night because she sleeps anywhere from 10-13 hours straight and she’ll pee in bed if she’s too tired to get up, or if she can’t get us to wake up and take her to the potty since she’s scared to go by herself at night.

She also occasionally has accidents during the day when she get especially excited, frightened, or if we’ve forgotten to make her go before we go out. For example, my sister’s wedding weekend was full of accidents since we were away for 4 days in a new environment and interacting with tons of new people.

But we know that this is completely normal for a 2½-year-old and we’re not sweatin’ it. We’re just proud that she was able to get the hang of it so quickly without much work on our part and consider ourselves extremely lucky!

5 Responses to “Toilet-Training Claire [Or, How We Completely Lucked Out]”