I brought Aerin to see an ENT specialist on Friday morning, just before I headed over to my parents’. And what the doctor found wasn’t too pretty.

First, he found some obstruction (a combination of dead skin cells and earwax) deep inside her ear canal. He was able to remove it with a special instrument, and holy cow did he take out A LOT of gunk! I couldn’t believe all that stuff came out of her little ears.

After the removal, he was able to take a better look and saw that she had fluid in both ears. Otherwise known as “otitis media with effusion” (OME), this buildup of fluid in the middle ear usually goes away on its own, but in some cases, it can last weeks, and sometimes even months!

What’s especially concerning about OME is that it does not show signs of infections such as pain, fever, redness, or pus. And guessing by the buildup of gunk in both of Aerin’s ears, the doctor told me that there’s a good chance my poor little girl has been suffering for a while, with the only symptom being hearing loss.

And the hearing test that immediately followed confirmed it.

“See this graph? It should be showing peaks and valleys…but as you can see, Aerin’s is relatively flat.”

According to the American Academy of Otolaryngology,

All children with middle ear infection or fluid have some degree of hearing loss. The average hearing loss in ears with fluid is 24 decibels…equivalent to wearing ear plugs. (Twenty-four decibels is about the level of the very softest of whispers.) Thicker fluid can cause much more loss, up to 45 decibels (the range of conversational speech).

The doctor gently plugged my own ears so that I could get a sense of what the world must sound like to her. I could still hear, but everything was muffled, similar to an underwater environment.

I wanted to cry in response.

He prescribed an antibiotic in hopes that it will help alleviate her OME. We are to return in nine weeks, which is when most (about 90%) children who go through this treatment are found to be clear of any excess fluid in their ears. If Aerin is in the unlucky 10%, we will have to take more aggressive measures, such as tubes in her ears.

Being rid of her OME doesn’t automatically clear us either; she still needs to pass a hearing test afterwards to ensure that there is no nerve damage.

Of course the diagnosis was met with a ton of questions from my end.

Should I have been cleaning her ears? I was told that I don’t need to do anything to my kids’ ears…is any of this my fault?
No, you shouldn’t be cleaning her ears. There is a very slight chance that when you had an appendectomy while you were pregnant with her, the IV antibiotics may have interfered with her hearing. But since she passed her newborn hearing test, this is unlikely.

Why didn’t our pediatrician pick this up?
It says in her chart that they were never able to perform a full hearing test after her ear infection earlier this year. Sometimes they’re limited by their equipment. Also, the obstruction was very deep inside her ear canal, and they’re usually trained only to look for redness or pus.

Could this be the cause for her speech and cognitive delays?
It may not be the only cause, but it probably played a big part.

I wanted to kick myself. Why hadn’t I pushed for an ENT referral earlier? (Even just getting an appointment took over a month!) Why was I satisfied with the dinky handheld hearing test machine at our pediatrician’s office when this doctor has a ridiculous setup of equipment and machines that takes up an entire room?

Most importantly, why hadn’t I noticed that my own daughter has trouble hearing?

That’s when I began to see, in my head, all the missed signs. Like how she doesn’t always respond to her name. How she definitely understands me better when I am facing her, speaking in a loud, clear voice. How she LOVES music — it’s because she can feel the beats with her body too!

I had incorrectly been attributing these to her personality and developmental delays, when the problem was, in fact, a physical one.

Even just the removal of the buildup in her ear canal seems to have made a small difference. When we got in the car after the appointment and I turned on some music, she made a series of expressions that I will never forget. First, delight. (Music! Yay!) Then, surprise. (Wait, this seems so much louder and clearer…) After that, concern and concentration. (Hmm why does it sound so different?) See for yourself in the picture below. I was able to take this snapshot during the last phase. 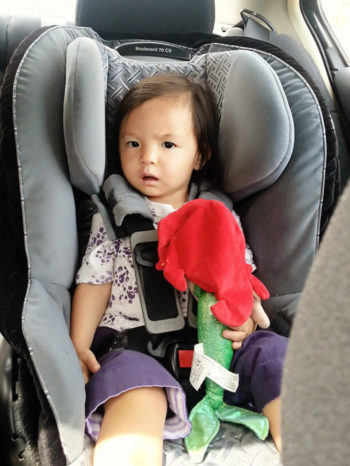 Unfortunately, Aerin seems to be having a bad reaction to the antibiotic (cefdinir) — it is causing her to have tummyaches and bad diarrhea, and with her sensitive skin, she gets horrible diaper rashes whenever she has diarrhea. I will be calling the doctor as soon as his office opens to see if he can switch her to another antibiotic. In the meantime, we have stopped giving her the medicine and have been giving her extra probiotics.

I have also emailed our early intervention representative with the results. I don’t think we will be canceling the services, as treating Aerin’s hearing loss may last a few months. Even if her hearing were to be fully restored tomorrow, I would still want to proceed with therapy so that she can catch up to her peers.

However, I did ask that our therapists be trained in, or at least have experience with kids with hearing losses or kids who are recovering from hearing losses.

The good news is that the doctor observed Aerin’s delays to be not nearly as bad as other kids her age with similar hearing problems. He said that the fact that she regularly says more than 20 words/phrases is a very good sign, and predicted that she will catch up in no time once her hearing is restored.