Where Were You When…

Yesterday I read that the Nevermind baby is now grown up and working for the artist who designed the Obama Hope posters.

This CD cover may help jog your memory: 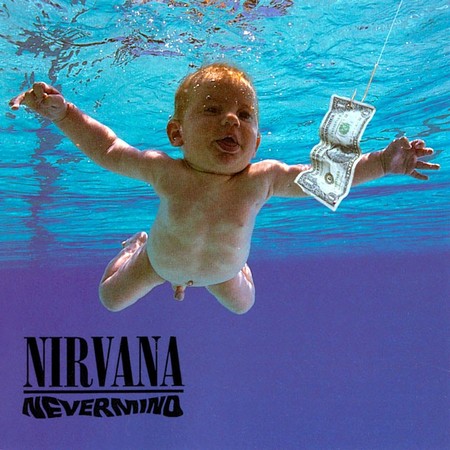 It’s hard to believe that this much time has passed since the release of Nirvana’s ground-breaking album.

I once read that our generation’s Kennedy assassination — meaning the prompting and universal understanding of the question “Where were you when Kennedy was shot?” — is the late Princess Diana’s tragic car crash.

Among my group of friends, among those who lived out our angst-ridden teenage years in American suburbia, the better question would be, “Where were you when Kurt Cobain committed suicide?”

And to answer my own question, I was at school. More specifically, I hurrying through the hallways in an effort to make it to 2nd period algebra on time when I noticed students huddled in corners, whispering in front of lockers, and crying.

At the time I knew who Kurt Cobain was but was not a fan of Nirvana. It was only within the next year that I became further entrenched in the growing alternative movement and saw Nirvana for who they were: an iconic band that spearheaded the grunge genre of music and became the flagship band of Generation X.

Hence, I did not grieve Cobain’s death with the rest of my generation. I only grieved for his death months and years after the event, additionally mourning my earlier overlook of his talent.

Where were YOU when Kurt Cobain committed suicide?

…or do you believe “Where were you when Princess Diana died?” is a better question for my generation?

« Zombie Street Fighters
Off to Our Babymoon! »

13 Responses to “Where Were You When…”