I have a new obsession.

(And if you’re friends with me on Facebook, you probably already know what I’m talking about.) 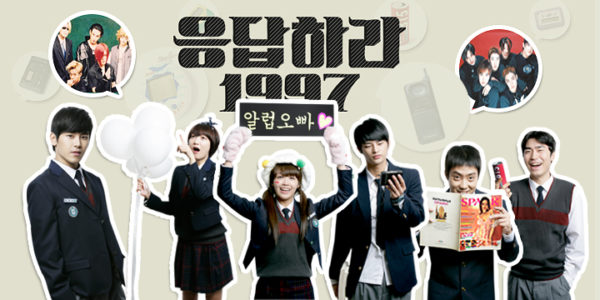 As the title suggests, the show revolves around a group of friends who graduated high school in 1997. The story unfolds through a series of flashbacks as they attend their 15-year reunion — and with the majority of the 16-part series taking place during the last decade of the 20th century, you can’t help but be taken back by the numerous 90s references.

If you are a Korean in your early 30s, you are sure to love this drama as much as I do.

You would also fall hard if you’re familiar with 90s KPop at all. (And I still maintain that the 90s remain the golden age of Korean music)

Heck, you don’t even have to be Korean or know any KPop to enjoy the show! Memories of Tamagotchis, Super Nintendo, and Guess shirts are sure to strike a chord with many people reading this blog, and the sweet and funny storyline is simply addictive.

I’ve even gotten J obsessed with the show, and he laughs harder than I do!

Don’t know Korean? English subtitles are available on Hulu, and other languages on Viki.

I knew that I had reached the height of my obsession when I looked up all 100+ songs that play on the show — the majority of them 90s KPop — and compiled them in a playlist which I have been listening to non-stop. (Luckily, I had most of the songs in my MP3 collection…and the rest weren’t hard to find online.)

Go check out the first episode — I guarantee you’ll get sucked in too!