I feel bad that I haven’t been blogging about this pregnancy. I guess I’ve fallen victim to the typical parent trap of documenting every step of the first kid and not doing much for the second. And for that, I apologize, BebeDeux.

There are three things I want to say with this update:

(1) I had my first OB appointment last week. Because I was only 5 weeks along at the time all we could see were a gestational sac. That being said, the doctor told me that the sac is measuring right on schedule, and that I should return in a couple of weeks. Due to scheduling conflicts, the next appointment isn’t until next Friday — when I will be 8 weeks along. We should definitely be able to see a heartbeat by then, and I hope that J can accompany me (he stayed home with Claire for the first appointment).

(2) I had horrible insomnia when I was pregnant with Claire, and this pregnancy is no different. When I asked the doctor if I could take anything to help me sleep, he asked me if I was feeling nauseous as well (YES!). He then told me to pick up some Unisom and vitamin B6 at the drugstore. Taking 25mg of Unisom 1x a day and 50mg of B6 2x a day has helped tremendously with both problems. I’ve done some further research on this “cocktail” and it turns out that Unisom was originally intended as an anti-nausea drug, but it made people so sleepy that the drug company began to market it as a sleep aid instead. Additionally, in Canada the Unisom+B6 combo is a pre-made cocktail prescription that is commonly given to pregnant women who are experiencing sleeplessness and/or nausea. I so wish I had known this when I was pregnant with Claire!

(3) We are pretty certain that Comang was the first to know about the pregnancy. A couple of weeks before I took the test, I noticed that he was being extra clingy and affectionate towards me. Because we were sleep-training Claire at the time, I had just figured that he must be reacting to my increased stress levels…but looking back it started just about the time I got pregnant! He continues to act extremely clingy and needy towards me (eg, he will sprint through his walks with J in order to get home to me, whereas whenever I walk him he will take his jolly time). 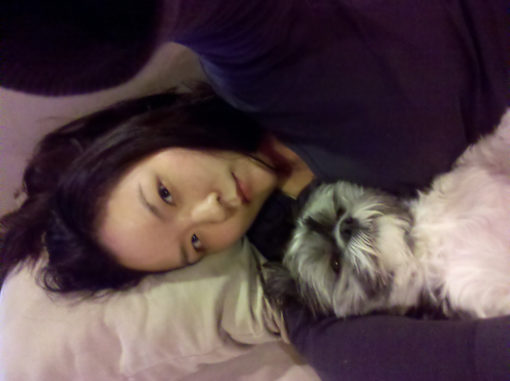 Despite my having Claire and being pregnant with another baby, Comang remains my first baby. We still “chillax” every night on the couch like this long after Claire is down for the night.

2 Responses to “A Much-Deserved BebeDeux Update”