Our family is exhausted. Little Aerin is teething — and has been for the past 1.5 months — and she has been extra cranky, in addition to waking up 4-6x a night. Claire’s first teeth sprouted just before she turned 7 months old; Aerin is now 7.5 months old and those pearly whites have yet to appear. Why oh why can’t our children be one of those who exhibit little to no signs of teething?

J and I tell our friends that we can’t remember much from the time period when Claire was 4-9 months old because IT WAS THAT HARD. We seem to have blocked everything from our memory banks. We can only hope that Aerin’s roughest patch will pass soon too.

I realized I haven’t talked much about my girls in a while, so I decided to do a post full of pictures and brief updates, starting from before my neck injury which was more than 2 months ago!

I have mentioned in the past that Claire treats her giraffe like it’s her own baby. (When we ask her, “Where’s the baby?” she will point to Aerin, then the giraffe.) When Claire started to place the giraffe in the stroller as well, we brought out a walker which features a basket and instructed her to try using that instead. And just as we expected, she LOVED it! 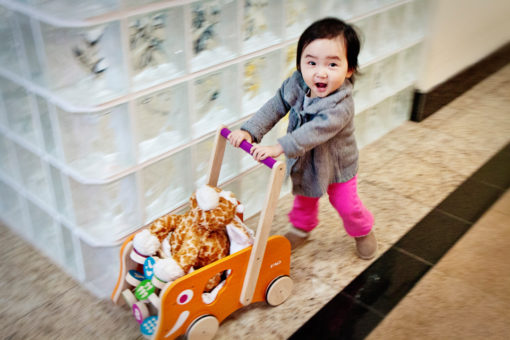 I immediately decided that a doll stroller was in order and got a $15 one on Amazon. We were able to bring it over to my parents’ during our stay there, and Claire got some good use out of it. (Just in case you’re wondering, yes, she insists on strapping it in securely before each ride.) 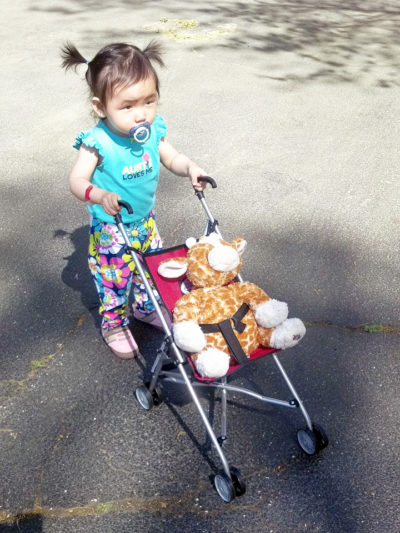 I had forgotten to mention here that Aerin seems to be hitting her gross motor milestones a lot faster than Claire. The very first time she rolled from tummy to back was at her 4-month checkup which occurred exactly on her 4-month birthday. As the doctor placed her on her tummy to test her upper body strength, she asked, “Has she rolled over yet?” And as soon as those words were out of her mouth, Aerin rolled over for the very first time!

Two weeks later, she rolled from back to stomach…and she’s been rolling EVERYWHERE since. If you can recall, Claire never liked rolling — she only did it a handful of times — and I remember worrying about this. I honestly haven’t done things too differently with each girl, so I really do believe it is a trait that is unique to each baby. Claire never crawled either (she still refuses to crawl) and went straight to walking; we all believe that Aerin will start crawling any day now because she loves to be on her tummy. 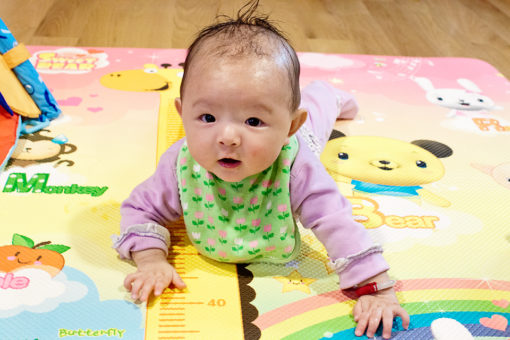 Currently, at almost 7.5 months of age, Aerin can somewhat sit up unsupported, but we still like to place cushions and such around her because she’s such a squirmy little thing that she refuses to sit still for too long. 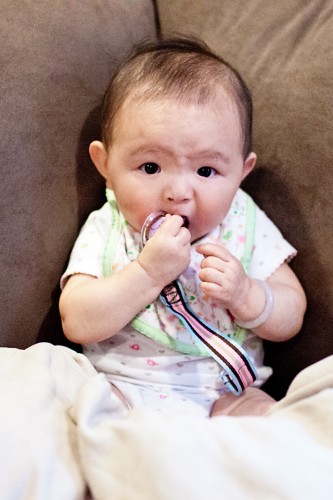 Sometimes it’s fun to take pictures of Aerin doing the same thing, or in the same poses as Claire when she was that age. Here’s a funny pair of them, when each girl was 6.5 months old:

Ni Hao Kai-Lan still remains Claire’s favorite television show. I know that some moms may balk at our allowing our kids to watch TV at such a young age, but when I was younger my parents actually encouraged my sister and I to watch cartoons so we could learn English faster, and we honestly believe that Kai Lan is helping Claire learn English too! (Since we speak Korean and Cantonese to her, English is currently her weakest language.) For example, when she was at daycare the teachers told me that she had no problem understanding them despite my worries that she would be utterly confused.

Here’s Claire sporting her favorite PJs: ones with Kai Lan on them. She loves these so much that we may need to get another set! 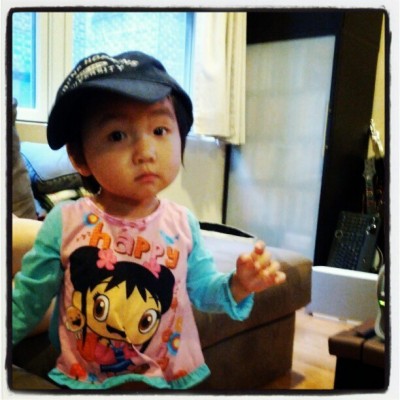 Claire has been doing magnificently on the language front. She has no problem switching back and forth between Korean and Cantonese, and has been speaking back in the correctly language even before she was 1.5 years old. It’s amazing how she can understand practically everything we say now — even English! — and we lost count of the number of words she can say a long time ago. She has just started to piece two and three words together, and I have no doubt that she will be speaking in short sentences, in two (or perhaps even three) languages, by the time she reaches the age of two.

One of her favorite activities at the moment is to draw on her magic board. She loves to watch us draw shapes and letters and animals, and tries to copy what we’ve just drawn. A couple of weeks ago, she succeeded in drawing her very first number — can you see the big number 2 on the right side of the board? 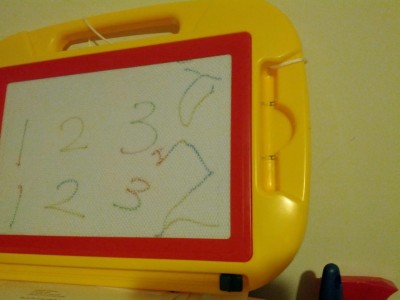 Here’s the Mother’s Day present she made for me at daycare: a flowering plant whose pot she hand-painted, and a card she helped stamp. I have never understood parents who save EVERYTHING that their children create, but now I know why. Seeing her very first handmade present to me brought tears to my eyes. 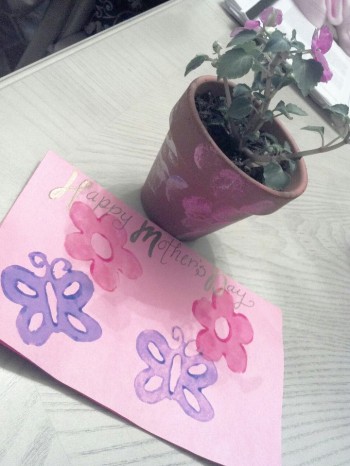 Speaking of Claire, an you believe she took this picture of Aerin? 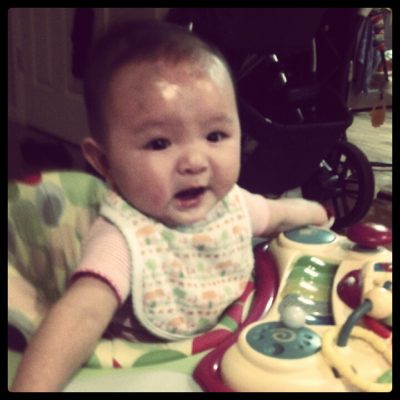 Lastly, here’s a goofy one of Claire wearing the lens-less glasses that her Aunt Annie got for her from Shanghai. (Apparently, they’re all the rage in China at the moment.) If you look closely, you can see that Claire now has…bangs. My MIL cut her hair while I was out, without consulting me first. I was furious when it happened, but now I’m feeling better about it. It’s just hair and it will grow out. And in the meantime, I just keep pushing her bangs up to the side. 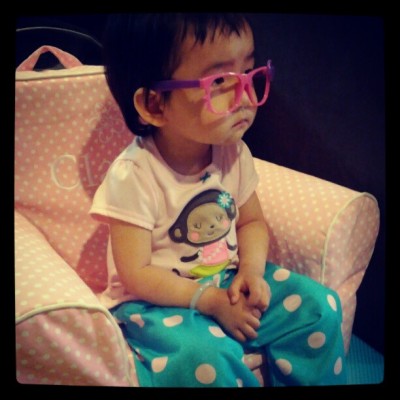 I am currently working on a redesign for this site, and I am loving it so far! I can’t wait to unveil it…hopefully in the near future!

5 Responses to “A Semi-Lazy Post [An Update in Pictures]”