If you have some time to kill this weekend…

And are looking for some fun, thrilling, intellectual entertainment… 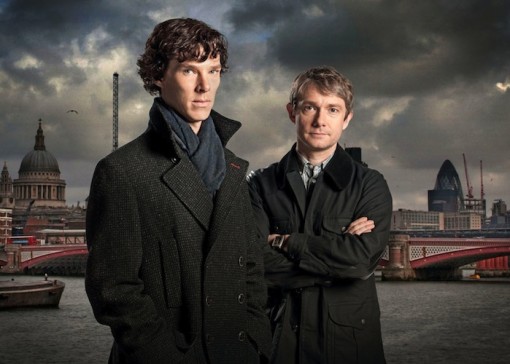 Set in modern London, this brilliant series features Benedict Cumberbatch as Sherlock Holmes, an antisocial and rude genius who describes himself as a “high functioning sociopath.” Martin Freeman plays Dr. John Watson, a former solider who was living a life so mundane that it had bored him to psychosomatic problems…until he met Sherlock, that is.

While there has only been 6 episodes so far — 2 seasons with 3 episodes each — each episode is 90 minutes long and certainly worth your time.

(The next season won’t air until 2013. J and I are absolutely distraught over the wait.)

J is a HUGE fan of the Sherlock Holmes books and he swears that this is the best adaptation of the crime-fighting, mystery-solving duo he has ever seen. An online review at McMudo’s Camp reads:

As lifelong Holmes fans themselves, the writers showed due reverence to the Canon, yet did a very clever job of adapting it to fit into the 21st Century.

Holmes and Watson are now Sherlock and John and still live at 221B Baker Street. John doesn’t publish their exploits in The Strand Magazine; he writes a blog.

This cutting edge Sherlock has a smart phone permanently attached to his hand, which he consults at lightning speed. Rather than send telegrams, he texts. Rather than publishing articles and “monographs,” he has a website called “The Science of Deduction.”

(The website and John’s blog really do exist online, by the way.)

Just watch this show. DO IT. If you don’t, I won’t be disappointed; I will feel sad for you that your life wasn’t brightened by this incredible show.