I just had a mommy breakdown.

J was about to leave for work when I burst into tears. He decided to work from home this morning and ordered to go get some rest.

Oh, yes, and we can’t forget the crying baby.

Let’s back up a little here…

Claire has also been extra fussy, extra needy, and extra cranky for the past month or so. She even cries when I hold her tight, which she hasn’t done since she had colic. We can only blame it on teething, because we haven’t changed her diet, routine, or anything else.

Her sleep has also returned to her pre-sleep-training days. She will fight bedtime tooth and nail. She used to love getting baths but now she will cry through bathtime as well because she knows that it is part of her bedtime routine. She will cry an hour or so nonstop as soon as we start to put her to bed.

She has also taken to waking up several times a night again and refusing to go back to sleep.

All the methods that we used for sleep training the first time seem to have little to no effect on my baby now. I have tried extending the length of time between naps, shortening them, cutting out a nap, and/or instituting an earlier bedtime. No help. Additionally, how can we bear to go through sleep training again when we know that she is in so much discomfort from teething?

Other moms tell me that their babies became extra fussy a week before cutting their first tooth. Some, just a day or two. Well, we’ve been going through this for over a month now and it’s driving me absolutely insane. Yes, we still have our moments when Claire is happy and giggly again. But these are far and few between and I can’t help but wonder if Claire will remain this way until she has cut all her first teeth (which means another year and a half of this torture). 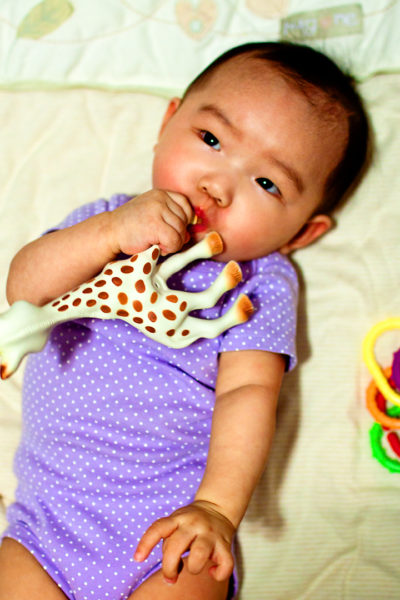 Pondering her next mischief…

Last week, Girl on the Park was visiting New York and I attended a brunch in honor of her visit. The Zhukeepers arrived with their adorable son in tow, and throughout the duration of the meal I couldn’t help but be amazed at how— for lack of a better word — chill their son was. How he didn’t mind that strangers were holding him. How he fell asleep without a fuss in his stroller. How happy he seemed.

Now, I consider Laura a friend and I am genuinely happy for her and her husband that they have been blessed with such an amazing kid. At the same time, I couldn’t help but feel a twinge of jealousy. I couldn’t help but wonder to myself, ‘Is this how babies should act?’

And when I came home to my own cranky mess of a baby I couldn’t help but wonder if I were doing something wrong for her to act this way.

The guilt continued to pile on for the rest of the week as I poured over various parenting boards and talked to friends and realized that Claire was still behind on most of her milestones. Was I doing something wrong in this regard too?

That’s what J said as he tried to console me this morning. “STOP thinking you’re a bad mom. STOP comparing. She is perfectly healthy and perfectly normal.”

Then he sent me off to bed. (I still ended up doing the dishes first.)

And here I am, blogging about what happened.

Maybe Claire is the normal one, and I am the overworried, oversensitive, neurotic mom.