Ever since I got pregnant I have been encouraging J to go out and spend more time with his friends. I figure that his days of partying will be cut back significantly once the baby arrives, so I like for him to enjoy his last “free” days and get it out of his system as much as possible.

Although I admit that I occasionally get annoyed to find a loud, boisterous, and/or hungover husband, I am okay for the most part because I’m glad that he had a good time. Sometimes he will regale me with long-winded, ridiculous stories that only a fellow drunk could comprehend and I’ll try my best to look understanding while laughing inside. Other times he will come home reeking of alcohol but I don’t have the heart to reprimand him because he will be soooo happy to see me — enough so that he gives the dog’s “omgomgomg I’m so happy you’re home!” greetings a run for their money.

And once in a while, he will tell me things that he normally wouldn’t under sober circumstances.

Last night was one of those nights. While he recapped his night out in-between drunk sloppy kisses and vigorous belly rubs, he made a confession that threw me off my feet.

“I love our daughter already; I really do. But sometimes I get really sad that we’re not having a boy.”

He continued on to describe how jealous he was of his friends who had sons, who continually post on Facebook or send email updates doing “boy” activities together.

“You know you can do all those things with our daughter, right?” I consoled him. “You have my full permission to turn her into a tomboy or a daddy’s little girl. Besides, we can always try for a boy later.”

That seemed to satisfy him for the time being, and he quickly moved on to another subject. However, I couldn’t help but silently dwell on his confession. 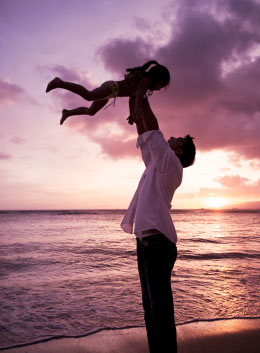 Coincidentally, the majority of J’s buddies (guy friends with whom he can talk about parenthood) have sons. So while he has women friends who have daughters, there isn’t anyone he can really relate to, nevermind talk to, about being a father to a daughter.

As I have written previously, I too was disappointed to find out that we were having a girl. But that disappointment has turned to joy as fellow moms told me stories of the incomparable bonds that exist between mothers and daughters.

I’m sure that J is not the only father who has expressed disappointment at expecting a girl over a boy. However, I also know that the vast majority of these fathers become inexplicably attached and fall heads-over-heels in love with their daughters once they are born. As such, I am hoping the same for him.

But in the meantime, is there anything I can do to help him be more excited at the prospect of having a daughter? Do my readers have any suggestions?

5 Responses to “Fathers and Daughters”