What was the strangest way you’ve met a friend?

For me, it was during the spring semester of my freshmen year in college. I was at a shuttle stop, patiently waiting for the bus to appear, when a strange boy approached me.

“Excuse me, are you Jenny?”

“Yes…how do you know this?”

“I see you on all my friends’ Buddy Lists! I always ask them who it is, and they say, ‘Oh that’s Jenny.’ They’ve shown me pictures of you, but I had never met you in person. Oh! I’m Eric, by the way.”

It turned out that we were headed for the same destination, so we sat next to each other on the shuttle bus and chatted the entire way.

We discovered that we had more than mutual friends in common. We had similar interests, and we even shared a class that semester! (It was a very large class in a lecture hall, so we hadn’t noticed each other.) Not only had I made a new friend, I had also gained a study buddy. 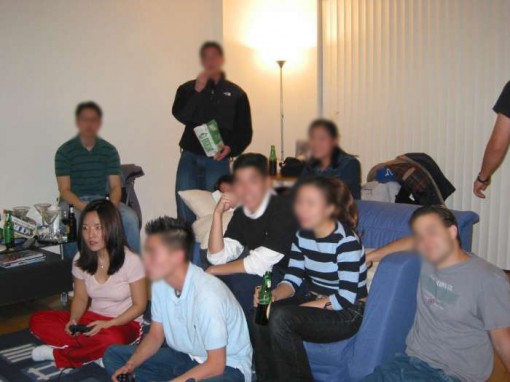 One of the many regular game and beer nights I used to host back in my school days.
(Faces blurred to protect privacies, as I am no longer close to most of these people.)

People have always told me that it becomes much more difficult to meet new people after you leave school. Be it lack of time, new obligations and priorities, less opportunities to attend social gatherings, or even just plain laziness! I, for one, know that I have fallen victim to the pressures of adulthood and became became more focused on my career and family as my circle of friends ceased growing…and eventually began to shrink.

And if Eric approached me today, using those same words? I probably would pass him over as a creep, as my cynicism and distrust have both magnified over the years.

To be completely honest, I can’t remember the last time I met a new friend. Acquaintances, definitely. But people I count as good friends? No.

I’m not entirely sure what the point of this post is. All I know is that I recently saw, via Facebook, that Eric had gotten married and I thought back to the first time we had met. How we hadn’t spoken to each other in years, and how so many people I once considered good friends are now merely social network buddies who share major life events through semi-public — in other words, impersonal — announcements and pictures.

But surely I am not the only one who has noticed this trend with each passing year.

4 Responses to “Friends in Memories”