How Do You React in Emergencies?

I am fortunate enough to have never been in a situation where I’ve had to dial 911. However, I have witnessed plenty of emergency situations involving other people that would warrant such a call.

That being said, I hardly ever pick up the phone to make that crucial call. Because the few times I have dialed 911 on behalf of others, I was shot down by the operator. “We’ve already received calls about this incident, ma’am.”

That, or I act like the idiots depicted on this graph: 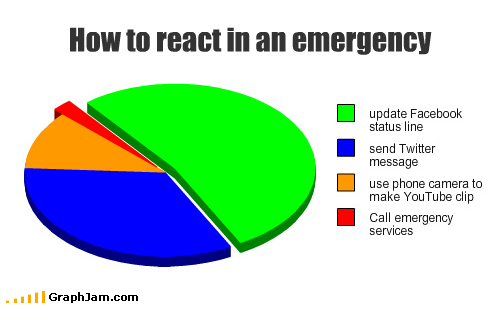 While the graph above is meant to be humorous, I also find it to be sadly true. Because how many of us really call 911 every time we see a situation requiring emergency help? Or, better yet, how many of us rush in to help?

Last month, a 23-year-old Queens woman was brutally beaten and raped, leaving her braindead and eventually taken off life support. What makes this incident especially heartbreaking is not the fact that she had immigrated to the U.S. just two months prior in order to pursue a law degree, but that as many as a dozen people witnessed the perp dragging her to an alley, heard the screaming, and yet managed to mind their own business. Ultimately, one person called 911 to report the crime which (luckily) led to the arrest of the man before he was able to get too far.

Just a month prior, a homeless man stepped in to help a woman who was being mugged and got stabbed himself. Surveillance tapes show that the wounded man lay bleeding on the sidewalk — for over an hour — while pedestrians walked by and ignored him. The man died alone on the sidewalk.

It is plain to see that both victims could have survived if someone had stepped in, or at least called the authorities in a timely manner. In the case of the homeless man, the woman whom he was defending witnessed his being stabbed, ran off, and never called the police.

I fully understand that the world can be cruel, and that New Yorkers prefer the “mind your own business” approach in their everyday lives. And to be perfectly honest, if I had witnessed either events, I probably would have: a) assumed someone else had already called 911; or in the case of the homeless man, b) assumed he was just another bum looking for attention.

Seeing the chart above reminded me of these two incidents and forced me to reevaluate my attitude toward emergency situations. I am saddened by my jaded, callous attitude towards those who may need my assistance. I want to change. I make a vow to not fall victim to the bystander effect.

6 Responses to “How Do You React in Emergencies?”