I’m Married to a Korean Celebrity

It is no secret that I was not attracted to J when we first met. Even when we were friends, I would often wonder why other girls found him attractive.

(And in case you’re feeling sorry for him, don’t be. He is well aware of this story and likes to remind people that despite all this, he still managed to snag me.

Besides, his ego is big enough as it is.)

In fact, his pretty boy features are not my type at all. However, I know that this is — and has been for the past decade or so — what’s all the rage in Asia.

We’ve even been informed a few times that he looks like an Asian celebrity. On one occasion, a waitress at a Korean restaurant actually asked me if he were someone famous!

I remember a friend telling us that J reminded her of the Korean actor Youn Sang Hyun. I didn’t think much of this until last night, when I was going through the pictures from Aerin’s dol…

And then I saw it. 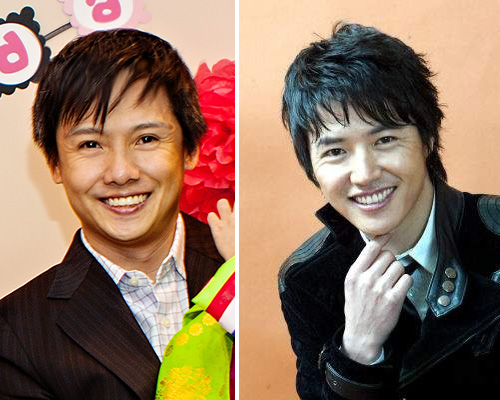 They would never be mistaken for twins, but you can’t deny that there isn’t a resemblance.

The best part? When J switched his Facebook profile picture to the one of Youn Sang Hyun above, no one batted an eye. And when he finally pointed it out, one person confessed that he thought it really was J…and that this picture was a glamour shot or something similar.

And no, I won’t give away her name — you can figure it out yourself if you’re that curious.

4 Responses to “I’m Married to a Korean Celebrity”