I have no need for an alarm clock because Comang always wakes me up at around 7:30am to take him on his morning walk.

This morning, however, he didn’t come get me until well past 8:30am. ‘That’s strange,’ I thought, but I figured he hadn’t slept well and just brushed it off.

The second sign that something might be wrong was that he wasn’t his energetic self. He usually runs ahead of me to the elevator and jumps as I bend down to attach his leash, ecstatic at the thought of going on a walk. But this morning, he trailed behind me and didn’t seem excited at all.

Again, I thought that he was just having an off day (doesn’t everyone?) and didn’t think much of it.

We commenced on our route around the block. That’s when I noticed it: a slight limp.

Never have I seen him look so miserable on a walk. I knew that he was really feeling horrible when we approached his nemesis, the husky that lives across the street. Comang usually goes crazy as we approach the husky — he knows that the husky can stomp his little butt to the ground, but is also aware that the husky can’t do anything to him with a fence between them. As such, he usually barks at and taunts the husky, almost as if to say, “HAHA YOU CAN’T GET ME!”

But this time, my little guy shrank away from the husky.

A few more painful steps later, he stopped. He sat on the ground and stared up at me. We had barely made it to the end of our street. I knew then that something was definitely wrong.

I picked up my poor dog and carried him home.

I shouted for J as soon as we returned. We targeted the leg (or foot) that must be bothering Comang, but couldn’t find anything wrong on the surface. The little guy didn’t wince or whine at our flexing his joints and searching his paws…he just seemed to be in pain.

I called our vet, but he is in surgery until 3:30pm and won’t be able to see us until 3:50. Since this isn’t an emergency, the receptionist told me to keep Comang off his feet as much as possible and keep him comfortable until the vet could see him. 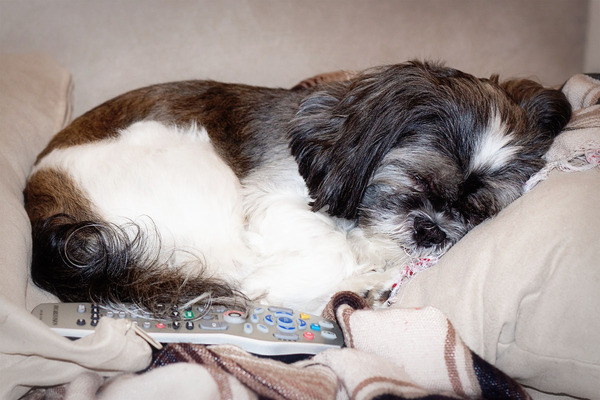 Comang has refused to eat this morning, and even ignores the treats I place in front of him. The sound of his growling stomach, coupled with the sight of him looking so downcast breaks my heart. He has been resting on the couch all morning, as you can see in the photo above.

I really hope my little guy is alright. I would be devastated if the vet finds something horribly wrong.