Motherhood: The Most Difficult Journey Yet (Part 3)

Before I begin, I wanted to thank everyone for the supportive and helpful comments and advice. It really is encouraging to know that I’m not the only one who feels this way.

At the same time, I couldn’t help but notice that not one person has stepped in to say, “It’s okay to formula-feed. Not breastfeeding your child does not make you a bad mother.”

Isn’t it funny the tremendous pressure and guilt-trips put on new mothers these days to breastfeed? There is a whole generation of people who were formula-fed, and they seem to be doing fine. I personally know many babies, children, and adults who were formula-fed and they are all perfectly healthy.

I know that breast is best. But at the same time, I don’t think mothers should be made to feel guilty if they choose to give their babies formula instead, nor do I believe a mother should feel forced to breastfeed if it is making her completely miserable.

Everyone, including myself, expected Claire to be a large baby. But even at 39 weeks and 4 days, she was a scrawny little thing with wrinkly skin that had not yet developed enough fat underneath.

She also tested on the borderline for jaundice. A common ailment, for sure, but one that made this new mother ultra-paranoid about providing enough nutrition for her baby. 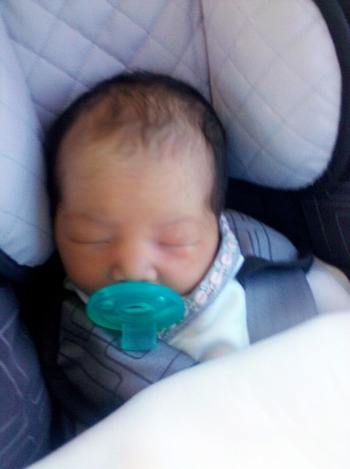 Coming home from the hospital. Notice how huge the pacifier looks
in relation to her head. She was too small even for the carseat!

My milk did not come in until the fifth day of Claire’s life (for most women, it comes in on the third or fourth day). Until then, my body continued to produce colostrum, but it was not enough to satisfy my hungry baby. She continued to cry and wail at my breast. We really believed that we were doing the right thing by supplementing with formula, and our pediatrician agreed, considering her dropping weight and worsening jaundice.

We ended up supplementing with formula for the first ten days of Claire’s life. In the meantime, I pumped like a maniac, drank about a gallon of water a day, had J run out to buy Mother’s Milk Tea, and ate tons of foods that — according to Eastern medicine — are believed to help a new mother recover and increase her milk supply.

I continued to try to breastfeed, but Claire would have none of it. She was a lazy, inefficient suckler. And by this point I was too tired to keep trying. We decided to focus on bringing up my milk supply first, and feed her pumped milk from a bottle in the meantime.

Because I was pumping every 2-3 hours for at least 30 minutes each session, I was exhausted whenever I was not pumping. My nipples began to protest at their new roles by cracking, bleeding, and developing painful blisters that reappeared with each pumping session. I rubbed breastmilk on them (which is supposed to have healing properties), slathered on Lansinoh Lanolin, tried saline soaks and warm compresses without much relief. More than once I had to throw away pumped breastmilk from the blood that had seeped into them…and all mothers should know how difficult it is to throw away pumped milk, especially during these early stages, as it seems as precious as liquid gold.

I cried after each pumping session because my breasts and nipples hurt so much. I didn’t want anything touching them and remained topless when I was not pumping, which meant that I was confined to my bedroom as my in-laws came over every day to help with the new baby. I couldn’t even hold my own baby because my nipples hurt so much.

I felt like a milking machine. The fact that I hardly saw my baby during the day did not help matters much. I was glad that my in-laws came over to help every day, but I also resented them for taking away my baby and my chance to bond with her.

During the nights, I would try my best to take care of my baby, but still continued to feel disconnected to her. I have never been the type to coo over babies, but I figured that this would change when I have my own kids. I was wrong. I felt silly talking or singing to her. If she didn’t need to be changed, fed, or consoled, I left her in her bassinet. Instead I roamed the house like a topless zombie, stressing over the messy state of my home and even attempted to clean (but usually ended up getting caught and reprimanded by J for not resting).

Read the rest of the series:

30 Responses to “Motherhood: The Most Difficult Journey Yet (Part 3)”