When Steve (THE Steve….Steve Jobs) announced the Apple iPhone during his MacWorld 2007 keynote, geeks everywhere spasmed in joy and set off a maddening ecstasy comparable only to the legendary feeding frenzies of great white sharks.

I admit – I was one of the said geeks. I played the keynote over and over, drooling over Apple’s latest innovation.

However, when the iPhone was finally released after months of anticipation, I did not purchase one. Don’t get me wrong – I love the product. But the lack of 3G on a device touted as the ultimate phone-slash-data retrieval gadget was disheartening.

As the months flew by, my SE M600i had really started to bug me. I still loved its design and UI, but I just couldn’t get over T-Mobile’s crappy service and slow data transfers. In addition, as I filled the phone with more and more information, the Symbian OS really started to suffer and lag.

What I wouldn’t give to have access to Asia’s cell phone technology, which has already started to migrate to the 4G networks! Alas, moving to Korea was out of the question and I needed to deal with the U.S.’ outdated systems. So after years and years with T-Mobile, I decided to switch to Verizon. After all, Verizon’s EV-DO service is probably the closest thing we have to a full 3G network here in the states.

Plus, Verizon had just released the new LG Voyager. 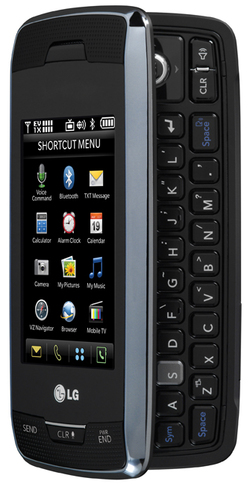 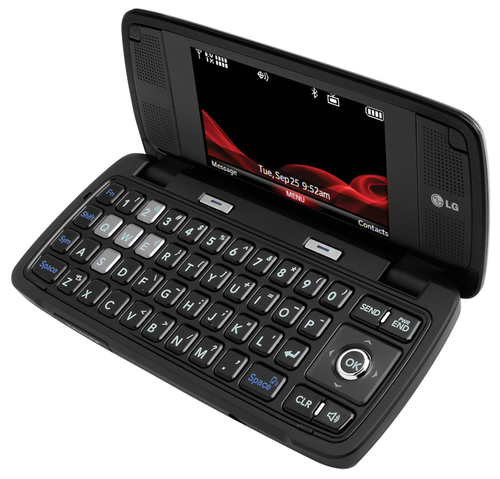 The reviews were in, and they were mostly good. Some even called the Voyager “the iPhone killer.” In fact, many speculated that one of the main reasons Verizon had refused to carry the iPhone (and give into Apple’s restricting demands) was because they had the Voyager in works.

I was still not 100% sold, and did a lot more research. LG or Apple? Voyager or iPhone?

I think this article probably swayed me the most.

Plus, I gotta support the mother country.

I freakin LOVE this phone!!!

For one, I had never used Verizon before, but the clarity in calls and the reception area is far superior to T-Mobile and AT&T.

I love the Voyager’s tactile touch-screen, the QWERTY keyboard, and fast (well, for the U.S.) data transfer speeds.

Although the Voyager is GPS-enabled, Verizon does not have a full GPS system. Rather, they triangulate your position based on their cell phone towers and work with third-party GPS companies to send you the information you need.

After reading this, I was a bit skeptical, but then I took it for a test run. I put it through the mother lode of tests, by using it on the GW Bridge. For those of you who are not familiar, as soon as you exit the bridge you are met with about 10 different options for exits, merges, and transfers to various streets, highways, and thruways.

The Voyager performed beautifully, even discerning lane changes and exits/entrances that were mere 50ft apart.

I immediately texted all my geeky friends and said, “my phone talks to me!”

So yes, I’m very happy with my new toy. I highly recommend the LG Voyager.

« For All Facebook Users...
The White Folks' Guide to the NYC Subway System »