A couple of weeks ago, I gathered up some information (how long I’ve been with Verizon Wireless, how much I spend per month, how I always pay my bill on time, and what other carriers are offering) and made a call to customer service.

“My current phone is DYING,” I pleaded. “I’ve taken it to the Verizon Store several times, and even performed two hard resets in the past month. I still need to restart it at least once a day to keep it running. I know I’m a few months away from my upgrade eligibility date, but is there any way you can move up that date for me?”

After some more begging (“My phone can’t even handle Candy Crush!”) and ass-kissing (“Verizon has the best network in the nation!”) and even a veiled threat (“So…how much will it be if I were to cancel my contract right now and switch to a different provider?”), a manager came on the line and voilà! I was granted an early upgrade!

(When I bragged to J about getting an early upgrade, he pouted, “What about me?” when he already has a kickass phone — an unlocked Galaxy Nexus — that is less than a year old. Still…CHALLENGE ACCEPTED.

After an hour on the phone with T-Mobile, I was able to get him an unlocked Nexus 4 for $50. BOOYAH!)

I had been eyeing the original Samsung Galaxy Note ever since it was released in early 2012 because I hate most soft keyboards. These days, physical keyboards only seem to accompany crappy phones; I figured a stylus would be a nice compromise. The HUGE size was attractive to my fat clumsy fingers as well.

(I’ve been noticing that the older I got, the larger I preferred my gadgets.

Has this happened to anyone else?)

So when Samsung announced the Galaxy Note II. AND that it would be available on Verizon…

It’s probably obvious by now which phone I ended up getting. (Also, the title of this post. Duh.) 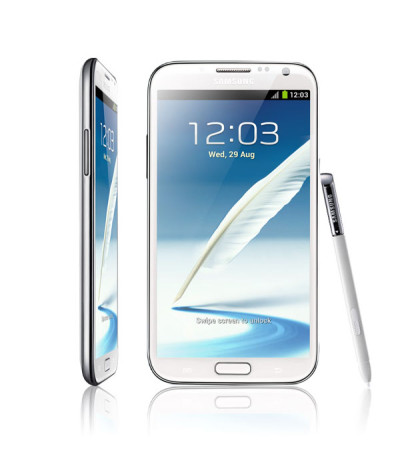 Oh, Galaxy Note II, shall I compare thee to a summer’s day? Thou art more lovely and blah blah blah…

Who cares how the sonnet ends, because I FRICKIN LOVE THIS PHONE!!!

I will not be going on the specs nor analyzing the phone’s performance here. I trust that anyone with access to Google can easily obtain that information.

What I will be doing is to highlight my favorite features of the phone, talk about my favorite accessories, and address the biggest issue that concerns most consumers about the Note II.

First up, the S Pen. 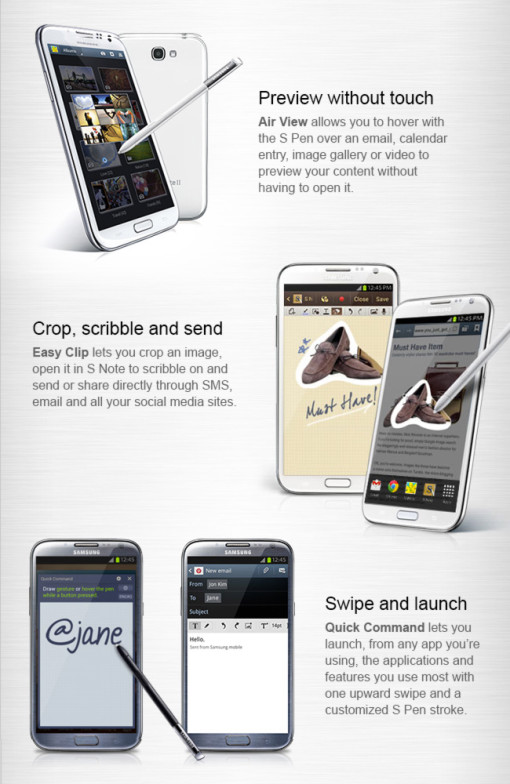 The promotional graphic above highlights some of the features of the S Pen. What it doesn’t tell you is that the S Pen makes it amazingly easy to take screenshots: just hold down the button on the side of the pen and tap the screen. And as soon as you take the screenshot, you’re directed to an application that lets you edit the image however so you desire.

The S Pen is also a great alternative to my fat fingers. Whenever my eyes are bugging out and hands all uncoordinated because I’ve been stuck on a level of Candy Crush forever, and I accidentally make an unintended move which usually results in my shouting, “EFFITY EFFING F*CK!”, I then smack myself in the forehead, call myself an idiot once more for using my clumsy fingers when I have a better tool readily available, and slide out the S Pen.

Then there’s S Voice. I’m not a big fan of voice recognition software (it reminds me too much of HAL), and I have read that the iPhone’s Siri is much better than Samsung’s S Voice. However, I’ve never used Siri so it didn’t make too much of a difference to me. All I know is that S Voice has been recognizing ALL my questions and commands in the 2 weeks I have had the Galaxy Note II. It even worked perfectly when J was trying it out at a noisy restaurant!

Here is a screenshot I took of one of my earlier S Voice sessions. 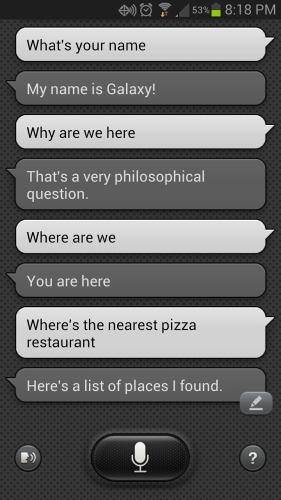 What this screenshot does not show you is how when I asked, “Where are we?”, S Voice responded “You are here” and immediately opened up Google Maps to zone in on my location. And when I asked about a local pizza joint? This screen popped up: 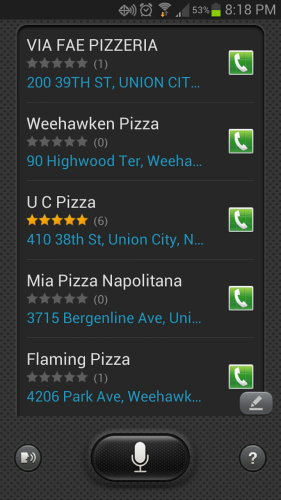 It’s definitely one of my favorite features of the Galaxy Note II — it’s fun, and a great way to show off your phone to your friends! However, I must confess that I only use it regularly to set the alarm clock.

I’ll mention one last favorite feature, and that is an app that comes packaged with the phone. (Like I said above, this review isn’t about going over every little thing about the phone, because you can find that in numerous other sites.) This may seem stupid, but it makes my heart sing whenever I open the app. And that app is the stock Calendar app. 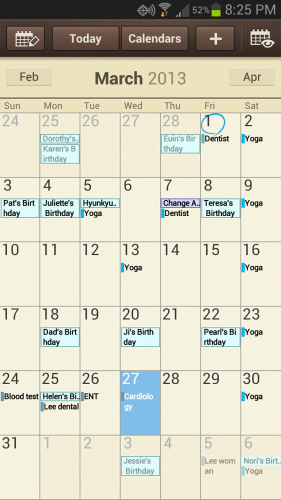 Just look at it! Not only is it so much better-looking l than the regular Google Calendar app, it’s more customizable too.

On to the accessories!

I love that so many cell phone manufacturers have been embracing the mini USB port for the past few years. Since we have several gadgets (including my old phone) that also utilize the mini USB port, I didn’t have to buy any extra chargers or data transfer cables.

So in the end, all I ended up purchasing were the official Samsung Galaxy Note II Flip Cover Case in Mint (buyer beware: the color is darker and more saturated in person than in the pictures!) and a screen protector.

Now, at first I went with a screen protector that was the most popular, and had the most favorable reviews on Amazon. I will not specifically name the brand here, but I did NOT like it. Oh, it was easy enough to apply and non-intrusive. However, it did not fit my Note II well — there was a noticeable gap between the protector and the edges of the phone!

So I went back to my tried and true brand: Martin Fields Overlay Plus. They’re seriously THE best screen protectors around, and they even include a perfectly-fitting cover that protects your camera lens! I don’t even know why I went with the other brand…what a waste of money. 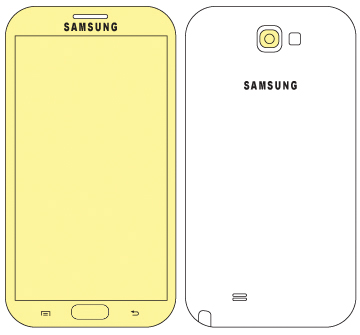 There’s one last item I purchased with the other accessories above. It’s not specifically for the Galaxy Note II, but I will be using it for my new phone. And that is the Mountek nGroove Universal CD Slot Mount. 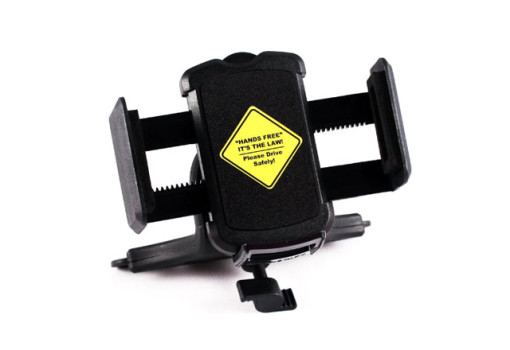 The reason I need a car mount is because I occasionally use my phone as a GPS device. (And now that my phone’s hardware is capable, I expect that I’ll be needing the car mount to listen to Spotify and Turntable.fm whilst on the road.) And the reason I decided to go with this one is because you can easily adjust it to different sizes, so that J can use it with his phone as well as others who may also drive our car.

The foam padding on the bottom and sides have a great grip on my phone — once, I accidentally knocked into it so that my phone turned upside down…and it held on! Additionally, the bottom grip has a hole in it, so I can charge my phone while it’s in the holster.

I like how it attaches to the CD player too.

There’s no need for sticky adhesives, and we can transfer it to another car if need be. (And who still listens to CDs in their car anymore in this day of iPods and other portable music devices?)

Are you still reading? Before this post goes from an essay to a novel, let’s go on to the final part of this review, which is the most common criticism I’ve heard abut the Galaxy Note II: its size.

When I first told a friend that I was interested in getting th Note II, his response was, “It may be a nice phone, but whenever you’re on the phone with someone, you’ll look like an idiot.”

True, it’s a much larger mobile phone than others on the market. But didn’t cell phones start out this big, if not bigger?

Now, if you want to see a ridiculously large phone, check out the new Galaxy Note 8.0. I believe BGR said it best when they wrote an article titled “Samsung is Just Trolling Us Now, and They’re Not Alone.” 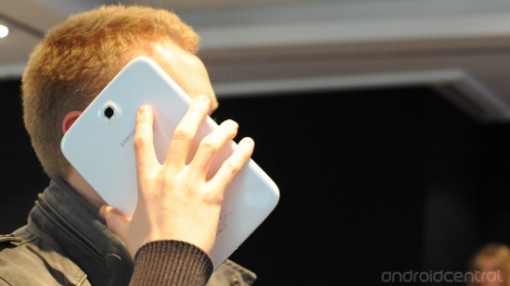 We can also swing on by to the other end of the spectrum: 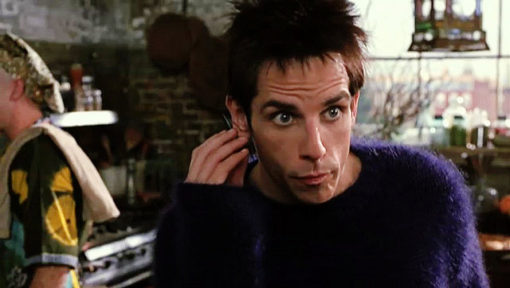 So in my eyes, the Note II isn’t too big — we’ve just gotten too used to tiny cell phones!

Besides, if Gordon Gekko can rock this phone: 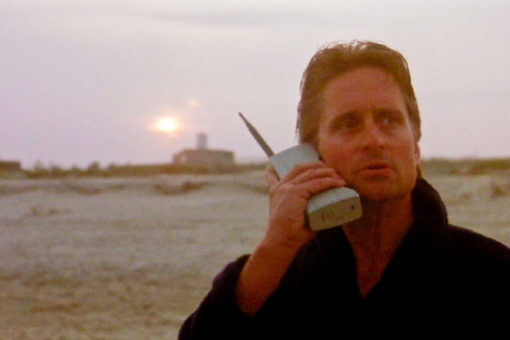 I can make it work too.

If you’re still here, thanks for reading! If I could say one last thing, it would be a recommendation to read 25 Samsung Galaxy Note 2 tips. It’s helped me tremendously in getting to know my phone better, and discovering stuff I would have never even knew existed.

Oh! And be sure to register your phone on the Samsung website, because once I did, I received a coupon code for 50% off a mobile accessory!

ETA, March 11, 2013:
I have left one very important information off this review, and it is Prey — a tracking app that can help recover my phone if it ever goes missing, or worse, stolen.