The 5 Levels of ‘Inception’

If you haven’t watched Inception yet, GO WATCH IT NOW. It is by far the best movie I have seen in years — a mindf*ck of which keeps audiences guessing until the end, only to leave the theater with even more questions. It is The Matrix (the original) of this decade.

I admit it — I’m a nerd. As soon as we returned from the theater, I looked up the web’s interpretation of Inception and read up quite a bit on the theories regarding the movie.

What I could gather is that there are three possibilities:

And although there are discussions brewing left and right with heated debates analyzing every little nuance of every scene, no one has yet to provide a solid interpretation of the film. There are facts that support and disprove each theory.

However, I believe that the movie ended perfectly. Christopher Noland has left it up to the audience to decide what happened, and I believe that’s where the true genius of this movie lies.

And for the infographic geek in all of us, here is Cinema Blend‘s interpretation of the 5 levels of Inception: 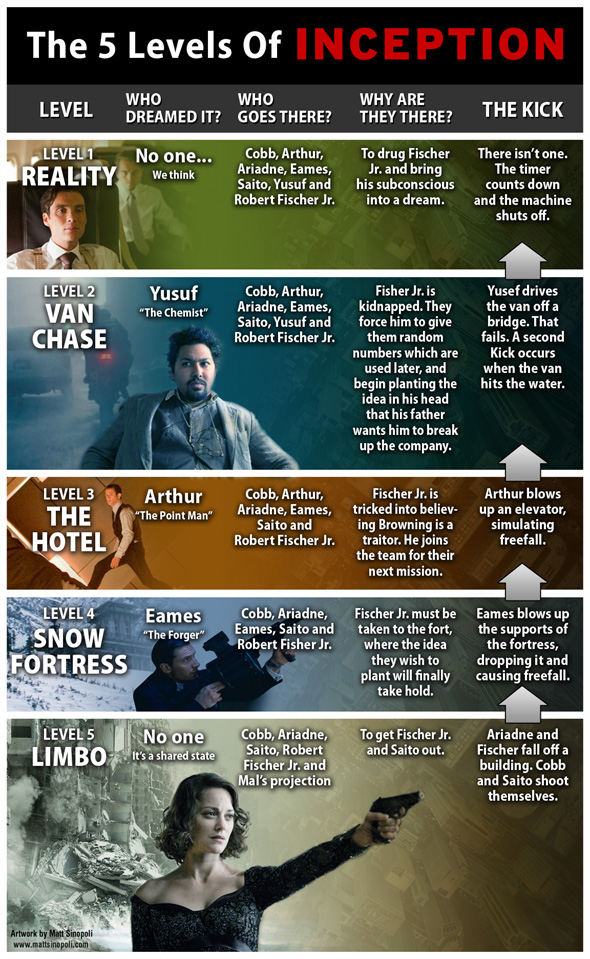 The optimist inside me likes to believe that Cobb got out at the end, and that he was happily reunited with his children. (Some people swear that if you listen carefully after the credits start rolling, you can hear the top topple.)

However, the idea that he was dreaming all along with Mal using inception on him to wake him up sounds pretty interesting too.

Have you watched Inception yet? What is your interpretation of the movie?

And for a more thought-provoking question…what would be your totem?

« Fix Apple's Boo-Boo with a Band-Aid
A History of the Beatles... »