(Disclaimer: I have tried my best to not include any spoilers for those who have not seen the movie. Enjoy!)

I’m a bit late on this review, but hey, better late than never, right?

I was one of the fortunate few who were able to procure a ticket to an IMAX showing of The Dark Knight on opening night (tickets had been sold out for weeks beforehand).

To put it bluntly, I believe The Dark Knight is the best movie ever produced in my lifetime.

(I said my lifetime, you dopes. This does not include Star Wars Episode 4, because it came out before I was born!)

The entire experience was uncanny, starting with the previews. They only showed two, but what they lacked in numbers they made up in raw power.

The Harry Potter and The Half-Blood Prince trailer had all but one line, “Once again, I ask you to do the impossible, Harry,” followed by the famous Harry Potter jingle. What a tease! I cried bucketfuls at the end of this book and I know I’ll cry at the movie too.

And Watchmen! I’m a sucker for any good comic book adaptation, but to put the director of 300 to work on the only graphic novel ever to win a Hugo Award (and the only graphic novel to be on Time magazine’s list of “the 100 best English-language novels from 1923 to the present”)….hello beautiful! Yes, I believe a dark movie can be beautiful, and I believe this movie truly has 300-level potential. Go watch the trailer here, and see if you can resist running to the theaters come 3/6/09. And is it just a coincidence that the Smashing Pumpkins’ “The Beginning Is the End is the Beginning” plays in the background, when the song first debuted in the Batman and Robin soundtrack? I think not.

Enough with the previews. Sorry I got so sidetracked. Needless to say, they thoroughly whet my appetite and elevated my adrenaline in preparation of The Dark Knight.

When Batman Begins was first announced, many had doubts that Christian Bale (or any other) can fill the mighty shoes of Michael Keaton. The Tim Burton days of the Batman films were the most celebrated, with Joel Schumacher (rightfully) taking crap from fans and critics alike for his ludicrous monstrosities.

However, Batman Begins prevailed. Christian Bale accurately brought to the role the dark, tortured soul depicted in the comics. I once read that Batman is so demented that he truly believes himself to be Batman, not Bruce Wayne. So in other words, Bruce Wayne is Batman’s alter ego, not the other way around. And I am able to see this in Christian Bale, both in Batman Begins and in The Dark Knight. 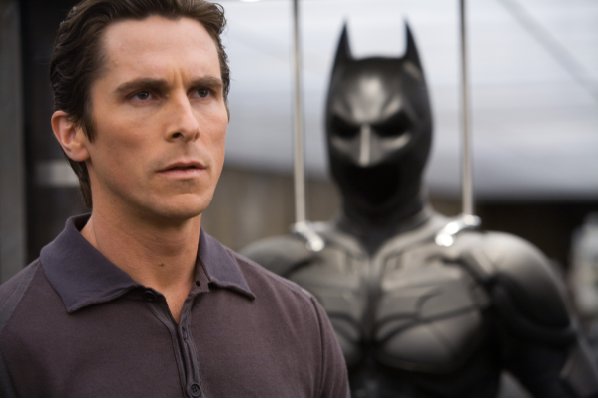 (all images from IMDb)

However, in this movie, the hero was clearly eclipsed by the villain. And unless you’ve been living in a cave for the past few months, you should know that I’m talking about Heath Ledger’s portrayal of Batman’s nemesis, Joker.

I confess that I had my doubts when I first heard about Christopher Nolan’s decision to cast Heath Ledger as the Joker. J proclaimed, “Jack Nicholson is the Joker. THE Joker. No one can ever top Jack as the Joker, ever.” And I wholeheartedly agreed with him…until I saw the movie. (FYI, J went back on his previous statement after viewing The Dark Knight and said, “I didn’t think it could be done, but it’s happened. Heath Ledger is the better Joker.”)

Heath Ledger is so convincing, so believable, that on many occasions I had to remind myself that there is a handsome man under the paint. Several times I had to question Heath Ledger’s own sanity to be able to depict such a dark and twisted character. The Joker is insane and brilliant. His cunning yet delusional view on the world and human condition makes one wonder, “I understand why and I admire his how…am I evil as well?”

I read shortly after his death that Ledger had trouble playing the Joker because of the dark place of mind required by the role…the thinly veiled wall between acting and reality became more sheer as he threw himself into character, resulting in insomnia, agitation, and paranoia. Was the sacrifice worth it? Not for the life of the actor, that’s for sure. However, I would not be surprised if Ledger wins a posthumous Oscar for this role.

The rest of the cast was stellar as well. Maggie Gyllenhaal is an obvious upgrade from Katie Holmes, and Aaron Eckhart’s lovable performance causes the audience to actually emphasize with Two Face and his motives. 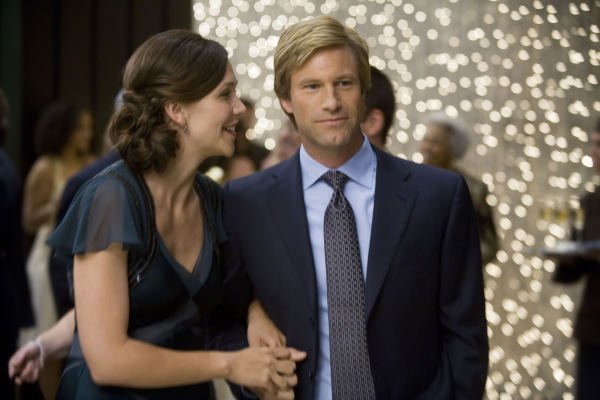 I especially loved how the trailers (even the full 5-minute one) seemed to show so much but kept some thing completely as a surprise. And these are great surprises, moments that caused gasps, cheers, and applauses throughout the movie.

As I walked out of the theater, I couldn’t help but notice the reactions from the audience. I had never before in my life seen so many collectively happy and excited faces after a movie.

I’ve read that Christopher Noland and Christian Bale have both signed on for another movie. And the rumors hint at a Penguin (who may have made an appearance as a mob boss in The Dark Knight) and possibly…Catwoman? Michelle Pfeiffer was a damn good (and sexy) Catwoman. Can she be replaced? If Nolan’s track record proves true, the answer is yes…and more.