Last week, I wrote that breastfeeding Aerin was going splendidly.

Well, this just goes to show that anything can happen in the wild, crazy journey we call motherhood, because I am no longer breastfeeding.

I had mentioned earlier that Aerin was suffering from 3 different types of skin ailments: eczema, baby acne, and little red bumps that our pediatrician guessed was heat rash.

Aerin developed these skin problems when she was about a week old, and they seemed to keep getting worse and worse no matter what we did.

No only that, she was spitting up and vomiting frequently (I will never forget the Exorcist-like vomiting she performed on my birthday). I know that many babies spit up a lot, but Claire had only spit up a handful of times total since birth — yes, I know we were extremely lucky — so all the upchucking was simultaneously worrying me and driving me crazy.

Then, last Thursday, I just couldn’t take it anymore. Aerin’s skin was so bad that she had pus oozing out of the various bumps on her face. The little girl would cry after every feeding — straight from the breast or from pumped bottled milk — and I felt like I was going to lose my sh*t.

It was at that moment when a thought occurred to me: what if it was my breastmilk that was causing these problems?

So we decided to experiment by only feeding her formula for an entire day.

Within just 6 hours, her skin was looking remarkably better and she was no longer crying after each meal. The change was so significant after the 12-hour mark that we decided to continue with formula for another day, just in case it was a fluke.

And within 48 hours, ALL of her skin problems were gone save for some leftover discoloration blotches. Not only that, she seemed more satisfied after each feeding and was sleeping better.

See for yourself. Look at my beautiful, happy baby! 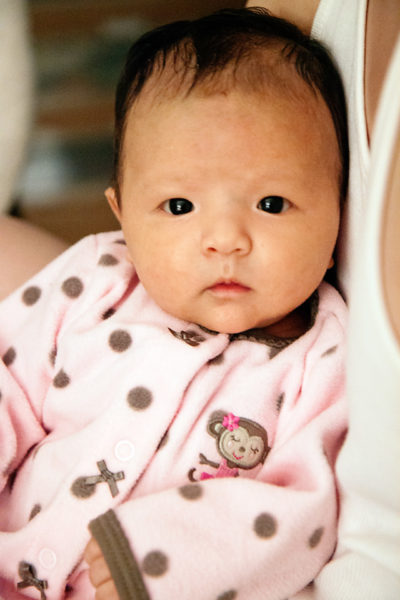 The problem was obviously my breastmilk.

So I did what any logical, sane mother would do: I cried to my husband, “I am POISONING my baby!”

I know that very, very few babies are actually allergic to breastmilk and that the most likely culprit was my diet.

I honestly couldn’t think of anything I was eating that could be hurting her, as I was staying away from the major sources of food sensitivities, such as dairy, certain vegetables, and spicy food.

J left the decision up to me and told me that he would support whatever I chose to do.

And that was that.

« How Kim Jong Il’s Obituary Would Look If It...
The Big Red Bow Event »