I used to love the boardgame Monopoly. I really did. My friends and I would play well into the night, and whenever a game looked like it would last longer than our tuckered-out bodies, we would take a picture of the board (so that no one would be tempted to cheat), grab our colorful paper money and head off to bed…only to return to it bright and early the next morning, exactly where we had left off.

One of my favorite stand-up comics, Russell Peters, says that Chinese people are impossible to do business with because they are some of the cheapest people on the planet and are never willing to give you a bargain.

Well, my husband is Chinese, and nowhere is this stereotype more apparent than when he plays Monopoly.

“I’ll trade you my Mediterranean Ave for your Park Place,” he likes to say. 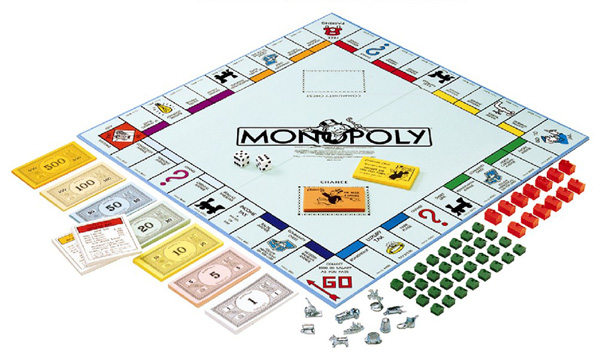 We don’t play Monopoly quite as much anymore, but
J and I still have four versions of the game in our home.

Although everyone cusses him out for being a cheap bastard, he somehow manages to get his way and is usually left the victor in a no holds barred, merciless game.

And no, J never gives me any preferential treatment for being the love of his life. As the spineless twit who always has to play the nice guy, I’m usually one of the first to go bankrupt and lose the game.

He calls it tough love. I call it ruthless assault on a timid creature.

I no longer enjoy Monopoly as much. Yes, my husband has taken the joy out of a favorite childhood game and he fully acknowledges that fact. However, he still loves to play, and I’m sure he would get a kick out of the following…

Recently, a group of college students have taken it upon themselves to figure out the SHORTEST THEORETICAL game of Monopoly. And they’ve boiled it down to a 4-turn (2 per player), 9 roll (including doubles) game:

The entire game can be played in as little as 21 seconds, and you can see proof of it in the video below:

I wonder if this theory can be scientifically proven…