Was the iPhone 3G Launch a Success?

I know I’ve been doing some Apple-bashing over the past couple of months, but let’s get one thing straight: I love Apple. I’m a total Machead who’s always trying to persuade her friends to switch to the Mac platform, and we only have Macs at home…three of them, in fact (my MacBook Pro, J’s black MacBook, and an iMac we share as a desktop and media hub).

I also believe that the iPhone is one of the greatest cell phones available in the US, with the best phone web browser of any handset out there.

So why the dissing and slamming?

I’ve been overly critical of Apple because I have such high expectations for it. I’m like a parent, who are our biggest critics because they love us so much and know exactly what we’re capable of.

I think that the iPhone 3G launch was akin to attending your child’s first dance recital and watching her fall off the stage.

(Which, incidentally, I have done.)

First, there was the activation problems, rendering the newly-purchased iPhones unusable and frustrating hundreds of thousands worldwide. A clever reader at Gizmodo declared it an “iPocalypse“. Those adept at Photoshop took more creative approaches: 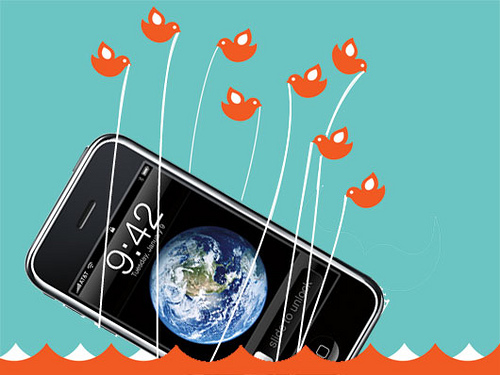 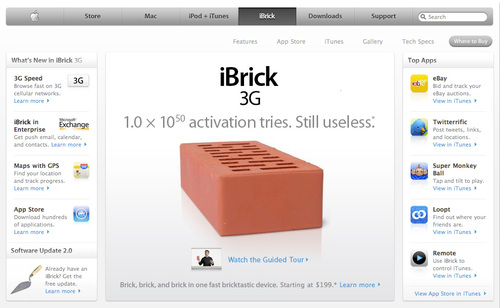 iBrick by Jesus Diaz of Gizmodo

With the servers down, the first-generation iPhone owners were unable to upgrade to the iPhone 2.0 software. iPod Touch users ran into similar problems. MobileMe was another nightmare, with push issues, slow transfer speeds, and downtimes.

It is now Monday afternoon, and most of the issues above have been ironed out. Many of my tech feeds today were abuzz with Apple’s successful launch of the iPhone 3G, having sold 1 million units in just one weekend. Steve Jobs added, “It took 74 days to sell the first one million original iPhones, so the new iPhone 3G is clearly off to a great start around the world.”

Hold on there, buddy.

Sure, the economy in 2007 was undoubtedly better than now. But based on these figures, isn’t it obvious that more iPhones would be sold in a shorter amount of time?

Stumble, stumble, and a bit of clever PR. I was not impressed.