“Why do we continue to watch this?”

Being the parents of two young girls, J and I have very little time to watch TV. So when we do get the time to catch up on our favorite shows, it is not uncommon for one of us to ask the other, “Why do we continue to watch this show again?”

Let me explain. Say that you started watching a television series. Say that you fell in love with its storyline, its characters, and the way that it makes you feel.

But after a few seasons, that show starts to lose its luster. The jokes become repetitive. The characters become clichéd and annoying. And worse still, the story begins to suffer.

In other words, the show has hit its prime long ago, and it’s been on a downward spiral since. In all likelihood, it should have been cancelled a season or two ago, but the network continues to air it because of people like us —

The people who continue to watch only because we’ve already invested so much into it. 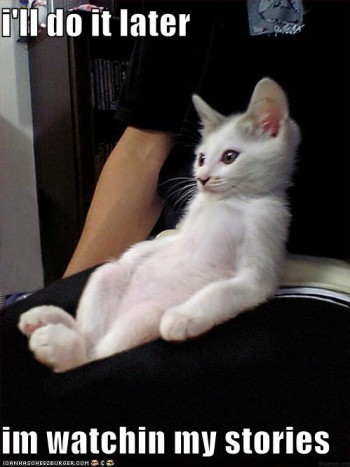 In our household, the top three (currently running) shows that fit this criteria are:

How I Met Your Mother. Perhaps the worst offender of them all. CBS needs to realize that the show can continue even after Ted meets his future wife. (Think: courtship, engagement, wedding, kids!) Just let us find out who the mother is, already!

House. Granted, they are currently running the last season. But we feel that the show lost its magic after Cameron left.

On the flipside, there also exist shows that have been running for many seasons but still manage to keep us eagerly tuning in every week, consistently delighting and surprising us while maintaining its integrity. My top three runners in this category are:

Fringe. This fourth season has been the best yet!

Bones. This isn’t a great show, so I don’t know why I like it so much. The entire Booth & Brennan baby story has been a great turn of events.

Do you also have shows that you can’t seem to stop watching although it’s grown stale? What about those that consistently keep you entertained season after season?

On a related note, everyone seems to be talking about Downton Abbey these days. Is it really that good?