I have not been a big fan of James Cameron’s latest films (I tried soooo hard to like Avatar. I really did! But, after three failed attempts at trying to watch the movie without falling asleep, I have called it quits.) but I remain a huge dorkus over his earlier masterpieces. Aliens. The Abyss. And who can forget The Terminator and Terminator 2? 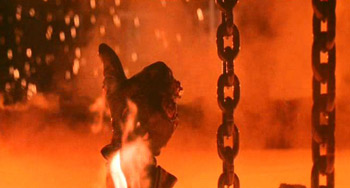 I bawled like a baby the first time I watched T2.
It was the very first movie I shed tears over — no joke.

Well, any true fan of the Terminator franchise is familiar with Judgment Day. The day when the machines rise up against humans. The day when computers try to take over the planet. The beginning of the War Against the Machines.

There are actually three dates given for Judgment Day in the Terminator franchise:

And since the first two dates have passed without a peep…

According to The Sarah Connor Chronicles Skynet became self-aware two nights ago, on April 19th, 2011, at 8:11pm. And two days later — today — Skynet launches its first missiles in a declaration of war.

I can practically hear the ominous-yet-exciting theme song from T2 playing in the background, can’t you?

To educate yourself on Skynet in preparation for the war, go check out Skynet on Wikipedia (which may or may not have written itself).

And if Judgment Day does happen, it was great knowing you all.

P.S. — Here’s what James Cameron has to say about Judgment Day:

« Introducing BebeDeux
Because She Loves Me Most »