Last night I managed to squeeze in a total of two hours of sleep (yay for insomnia!) and spent the morning in a foggy haze. After energizing myself with some pad thai, I suddenly jolted awake.

Ohmigosh there are only 6.5 weeks left until my due date! There is soooooo much left to do! How am I ever going to get everything done in time? And why is the house so dirty? What if the baby decides to come early? What if unexpected guests drop by? Ohmigosh ohmigosh ohmigosh…

I proceeded to spend the next four hours dusting, vacuuming, polishing, and scrubbing. The last hour was hell — I really felt like my back was about to give out on me. But I forced myself to keep going. “It’s for the sake of the baby,” I kept telling deluding myself.

Needless to say, I am now POOPED. I can barely put together a coherent sentence, let alone spew out blog posts.

So I’ve decided to make up for another day lacking good posts with a movie trailer I watched yesterday: Darren Aronofsky (of The Wrestler and Requiem for a Dream fame)’s Black Swan, a psychological thriller starring Natalie Portman, Mila Kunis, and Vincent Cassel. 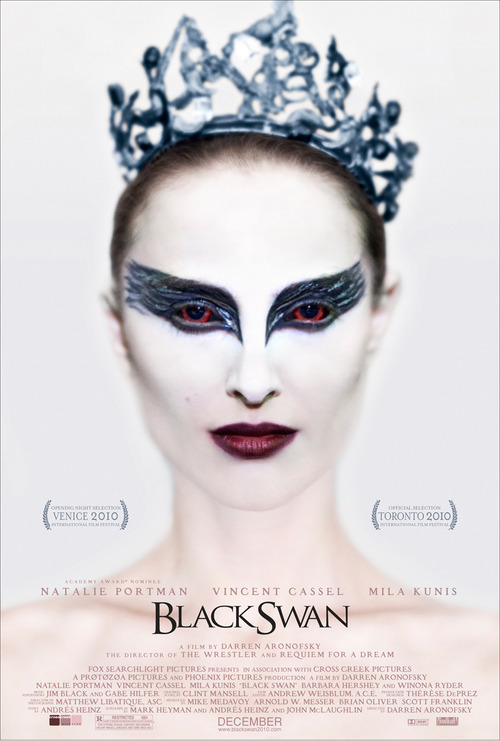 BLACK SWAN follows the story of Nina (Portman), a ballerina in a New York City ballet company whose life, like all those in her profession, is completely consumed with dance. She lives with her retired ballerina mother Erica (Barbara Hershey) who zealously supports her daughter’s professional ambition. When artistic director Thomas Leroy (Vincent Cassel) decides to replace prima ballerina Beth MacIntyre (Winona Ryder) for the opening production of their new season, Swan Lake, Nina is his first choice. But Nina has competition: a new dancer, Lily (Kunis), who impresses Leroy as well. Swan Lake requires a dancer who can play both the White Swan with innocence and grace, and the Black Swan, who represents guile and sensuality. Nina fits the White Swan role perfectly but Lily is the personification of the Black Swan. As the two young dancers expand their rivalry into a twisted friendship, Nina begins to get more in touch with her dark side with a recklessness that threatens to destroy her.

I have never taken a day of ballet classes in my life but sometimes I regret having chosen taekwondo over the classical dance genre (at least I managed to score a second-degree black belt out of it!). Perhaps if I had taken some ballet classes, I would be more graceful and less of a spaz. And while I usually hate chick flicks, I loved the movie Center Stage and have had an interest in ballet flicks since.

Black Swan is set to be released on December 1 and I hope that I will be able to wrestle myself away from the baby long enough to go catch it.