Elyssa has been a loyal reader since my Weddingbee days, and when she showed me her own blog I couldn’t believe how great it was!

I did not attend my own 10-year high school reunion for two reasons: (1) I did not like high school and did not need the reminder; and (2) it cost $88/head for hors d’oeuvres and rail drinks…and the venue was a local pub. Plus, as Elyssa states in this post, all the people I wanted to stay in touch with I already did through Facebook and/or other social media sites.

Having just passed that dreaded 10 year reunion from high school last summer, I feel well equipped at giving you my PoV on this article. CNN brings up a point. And it’s pretty simple. If you are able to connect to those people that you haven’t spoken to since graduation through FB, are you still going to go to your reunion? My answer: No, I will not.

I have a FB account. And I am friends with several people from HS. I will be honest. Some of them are “hidden” from my daily feed. Why? Because I don’t know you anymore, but you still wanted to be my friend and I’ve been told its rude to ignore a friend request (but that doesn’t mean that I don’t).

If I haven’t talked to you in 10 years, and I have you hidden on my feed and/or I am not even a FB friend with you (maybe you asked, maybe you didn’t) why would I trek on back to my reunion and pay close to $100 to hang out with you and have a whole bunch of awkward conversations with people that I haven’t seen in 10 years?

Reunions are for really one thing, and one thing only. Don’t go telling me they’re not. I think Romy and Michelle summed it up nicely:

Romy: Michele? Now that I’m looking at this, our lives don’t seem as impressive as I thought.

Romy: Well, do you think it’s impressive that we’re still single, and we’ve been living together for ten years, and I’m a cashier and you’re unemployed?

Romy: Then, what’s the point of going if we’re not going to impress people? 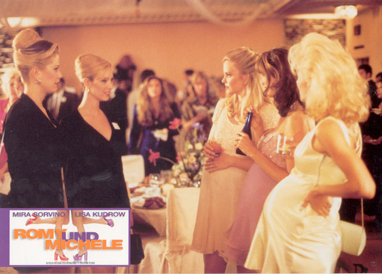 You see, if you really haven’t accomplished anything but going to college, graduating from college, and actually having a job and maybe even a significant other, there is no reason to go. None. Maybe if I had graduated from MIT and became an astronaut I could go and boast about how cool I was…but then you’d be the butt of jokes for the next ten years. Reunions are just inadequacy test for the masses. Who’s pregnant? Who’s going bald? Damn she looks like she lost weight (and not in a good way). Did you hear about Jane getting a divorce? Tsk Tsk. Oh and Billy? He hasn’t had a job now for 5 years and lives in his parents basement.

Yeah. Don’t think those conversations don’t happen. Then you know what you do afterwards? Go out to a bar and get wasted with the 3 people you still do talk to from HS and bitch and complain and gossip about everyone you just spent the last 3 hours with. Totally worth it.

So sorry CNN, I have to say that FB killed the reunion for me because it made me realize that I am still friends with the few I went to HS with for a reason. I’ve weeded out the rest. And that $100 I saved by not going? It’s on my feet. In the way of shoes.

I’m just a girl, living in Seattle. With the boy, J, the dog, Gwen, and the kitty. I love to muse about things that little ole sarcastic me thinks is funny on my blog TwentyFiveFifty.  Pretty simple stuff! Thank you Geek in Heels for letting me guest blog. Congratulations to you and your family!

« Guest Post: How I Got Out of Debt
Motherhood: The Most Difficult Journey Yet (Part... »