Our next guest post comes from Fabulously Broke, one of my favorite lifestyle/personal finance bloggers. I always found her story inspiring and asked her to write a special post on how she managed to clear $60k in debt AND build a respectable net worth. Enjoy! 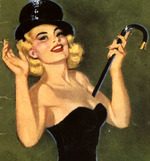 I am a twenty-something consultant who was $60,000 in student debt after graduating college, and I cleared it in full after 18 months.

I started my climb out of debt by blogging at Fabulously Broke in the City which is a lifestyle blog with a hint of money talk, and I’ve just recently started another blog about my other passion: achievable, everyday minimalism and how to simplify and organize your life at The Everyday Minimalist.

Getting out of debt is a mix of opportunity, luck and discipline

I will never say that it was only my brilliance (hah!!) that helped me along my path to independence, because I had a lot of things going for me.

Each person’s situation is different, so please consider that what worked for me, may not work for you, so here are 3 things I think that helped me that I had little to no control over:

When I was on projects, I tried to stay in the client’s city, because my living (hotel expenses) and eating expenses were covered by them, as it was cheaper than paying for me to fly back home every week.

I only did this for about a year in total (not including breaks in between where I had to go ‘home’ when projects ended), and as a result I saved a bundle on living expenses, about $20,000 if I were to estimate. This also helped me find “minimalism,” which isn’t as extreme as the word might imply!

This was a risk and as far as I know, completely unheard of. It could have very well gone the other way, but I’m lucky it took off instead of tanking.

I want to note that not everyone who makes a high income or had the opportunity to do what I did took advantage of it to save money and/or get out of debt.

I am not saying this because I think I’m special, but it’s something to keep in mind, because it can be easy to feel defeated because you feel like you don’t make enough to get out of debt.

A very big part of debt reduction and wealth building is being disciplined, motivated, and consistent. It is far better to take action and make a plan to save $50/month and get out of debt at a snail’s pace, than to bury your head into the sand like an ostrich and ignore the problem entirely.

It isn’t easy to get rid of debt, especially at lower income levels, but in most cases, it’s not impossible.

So how did I get out of debt and turn it around?

I was disappointed, no, DISGUSTED with my unorganized finances. I couldn’t believe I let myself rack up that much debt, and I knew I could have done better.

Letting bygones be bygones, I used that disappointment to motivate myself to make a change for the better.

Every time I looked at that amount of debt, I would feel even more motivated to watch it go down, and I was scrutinizing every purchase I made, because it had an impact towards my end goal of being debt-free.

Emphasis on the “YOUR!”

After I got over the shock of the final amount of debt I was in, for the next 6 months, I devoured every piece of information about money in sight, from blogs to books to general articles about money and this is what I gleaned as the most important pieces of information:

The Top 5 Things You Should Know About Your Money

The #1 money book out of all the ones I read was also the first one I picked up: The Millionaire Next Door by Stanley & Danko.

It really changed the way I saw money and “rich” people. I realized that having lots of money wasn’t for showing off what you bought, but for the security, freedom and peace of mind that it brings.

This may seem like common sense to a lot of you (and sounds stupid now, even in my head), but it never clicked with me as being significant until I read that book and it all fell into place to see how the rich live: quietly and well below their means.

Since then, every other personal finance book I’ve read has been ho-hum in its life-changing ability.

I also had a great group of supporters, namely my fellow bloggers and beloved readers. I joined the ranks by becoming (yet another) blogger, talking about my journey out of debt at Fabulously Broke in the City; just seeing how much progress everyone else was making on their own journey really helped me stay motivated and on track.

3. Budgeting, Tracking your Spending & Doing something about it!

I started trying to keep a budget, which was an outright disaster for about 3 months, because I was trying every budgeting tool I could get my hands on out there (MS Money, Quicken, Pear Budget, etc), and was SO FRUSTRATED that I wanted to give up.

None of the budgets out there let me see what I found important, like whether or not I paid for what I bought the other day on a credit card (which I kept at $0), at what store, what I bought, why — it didn’t have the detailed level of tracking & analysis that I felt I needed, and it didn’t show me anything I found to be very useful.

Then I thought: What the heck you should make your own damn sheet and I ended up creating my own version with colours & pretty graphs to keep me interested.

From then on, it was like I was on fire.

I tracked my expenses daily and actually enjoyed it.

A simple action of typing in what I spent on groceries that day, made me quickly re-assess what I bought that day, because I could see how much money I had left over for groceries for the rest of the month.

Even if I went over in the grocery section, I wouldn’t beat myself up, but it helped me zero in on my trouble spots.

For example, I had gone over the budget in my groceries a number of times, but I thought: Meh, it’s food. I need to eat. Who doesn’t?

It wasn’t until I saw the recurring pattern that I realized it was something I needed to really pay attention to, because I either needed to raise the amount and steal from another budget category, or cut back in my grocery spending.

From then on, whenever I shopped for anything, if I picked up something on impulse each time I went to the store, even for $2, I recognized it was an impulse purchase that needed to stop.

It is money that essentially goes to waste, because it eats up your budget & affects your spending for the rest of the month.

I felt like I became more conscious over time, and I’d pick up something from the grocery store the next time, wonder if I needed it, and either put it in my cart or put it back on the shelf.

Don’t get me wrong: If I really wanted it, I’d buy it, but I’d make sure I had room in my budget to do so.

A treat is fine, but it stops being a treat when it’s a regular purchase.

After doing a little bit of my expense tracking for a while, I stepped back as objectively as I could and I spent time thinking about why I had it on there, if I could do better and what it was really costing me.

So for example, I looked at paying for cable television — $35/month.

I asked myself what channels and shows I liked to watch, and then observed my watching habits over a month or so.

I realized that I was:

Or it could be $420 more towards my debt each year, which would decrease one of my debts by 70 days (it was costing me around $6/day).

So I cut TV out of my life, and saw my favourite shows when they came out on DVD or online.

I’ve never looked back since (although when I am in a hotel room where I have no choice but to pay for cable TV in the rate, I do watch it on occasion).

I did this for everything I paid for: rent, landline telephone, groceries, transportation, makeup, clothing, entertainment, eating out, Starbucks habits, and so on.

These little changes I made all added up and the effects from my lifestyle changes didn’t happen over night.

Not everything I did was to cut back: I also increased my spending on healthcare, such as going to the dentist more often.

To this day, I am still constantly thinking about my purchases, mistakes I (recently) made and how I can do better in the future. It is a lifelong process with a beginning but no end.

I gradually became a minimalist.

I realized that I had been in that hotel for about 3 months, with one large suitcase, and I didn’t miss much, as long as I had a kitchen and a bed. That’s when the wheels started to churn and I saw the potential for a different kind of lifestyle — where I’d have less stuff to buy, take care of, and use.

I had no idea what minimalism was at that time, and I called what I did being a “modern nomad,” because I had no set home address and I was living out of hotels.

It has saved me a bundle of money, and made me re-prioritize what I want to spend more of my money on — namely traveling around the world.

Minimalism isn’t about being extreme: I know many feel that my lifestyle can be really unrealistic for many, but like money management, it can be unique to each person’s situation and lifestyle.

You don’t have to do what I, or anyone else does with our money or our lives.

Just do what you want to do.

And that’s pretty much how I did it

I made a lot of mistakes (and I still make them, but I feel like I’ve grown by leaps and bounds from when I first started.

If you want to get out of debt, you will find the will and the ways to do it, and even when there are setbacks, you get angry and sad about it, but you move on and push on.

It’s intense, but so very worth it, because it’s something that will really stay with you for the rest of your life, even though it was a hard lesson to swallow.

6 Responses to “Guest Post: How I Got Out of Debt”