The following post comes from Nodakademic, a blogger-wife-student-professional (yeah, I don’t know how she does it all either) who resides in the chilly state of North Dakota. I really enjoy her blog and I think that we can be friends in real life if we didn’t live so far apart. Isn’t it funny how blogging can help form relationships with people you would otherwise have no clue of their existence?

In this guest post, Nodakademic writes about the great geek debate: P.C. or Mac?

I, personally, am a Mac girl but I agree with her that the quality of Apple has gone downhill in the past few years. (And I probably would have switched to P.C. or Linux if I don’t have all this expensive Mac software!) Another interesting fact: the picture of her from the launch of Mac OS X Panther? The launch of Panther was the first geek-related launch party I attended, and the first tech product I ever stood in line for!

I hope you enjoy this post, because I know I did! And I hope that you’ll leave a comment below weighing in on the Mac vs. P.C. debate!

I was a techie kid in the sense that only mid-90s kids can be techie. Armed with my Angelfire and Geocities homepages and my ICQ account, I was pretty sure I knew everything there was to know about computers. I got in to the field a wee bit too late to make millions in the boom (and then lose those millions in the crash), but I was a teenager at probably the only time when teens really did know much more about computers than anyone else.

When I turned 15 I got a job at a repair desk working on IBM and Dell laptops for a local college. I replaced screens, hard drives, motherboards. I saw the aftermath when someone’s toddler jammed half a sack of skittles in to their floppy disk drive (sticky), when someone spilled coke and tried to dry their keyboard with a hairdryer (sticky, melty), and when someone ran over their laptop with their car (sticky, shardy). And OF COURSE I knew that Windows ruled. Macs were just those dumb computers I had to use in my junior high keyboarding class.

When I went to college I got a Gateway laptop. It was problematic and glitchy, but that was clearly Gateway’s fault, not Windows 2000’s! I majored in computer science. I failed at it because apparently, I do *not* actually know everything there is to know about computers. Apparently people who want to know that stuff actually listen in class. And let’s face it: most of them didn’t grow up in rural northern Minnesota surrounded by sugar beet fields, as long as we’re talking odds. (I did finally graduate by the way, with a minor in computer & information tech and a major in *groan* political science.)

At the end of my sophomore year, while flopping around trying to decide on a major, I applied for and got a job at the campus bookstore. I was stationed in the electronics store (any UO folks out there ever shopped at the Digital Duck?) and I was hired because I knew about Windows computers. They needed someone who could enthusiastically sell one, because apparently most of the other employees there were Apple fan-boys. (Literally ‘boys.’ I was the only girl there for a while.) 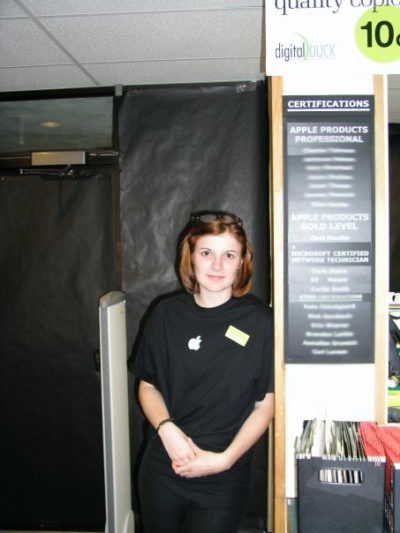 Long story short, it turns out Apple computers had changed a little since the grey-screened little candy-colored monsters my high school kept locked in the smelly lab. They were… nice. Sleek. Sharp. Quick. They had software, and that software worked well. They worked with printers and mice and keyboards and drawing tablets (but I had heard Macs don’t work with ‘anything’?!).

And the iPod. Oh, the iPod. How freaking cool was THAT? I was working for the store at the very time that iPods caught steam. Those iPods were over an inch thick, weighed half a pound and could hold 5 GB of music, but that was so small and that was so much space.

I guess having a Windows person on staff didn’t work out for the store: I was a convert. Within 6 months I owned a Powerbook and an iPod. Windows sucked. Windows was slow and sluggish and just generally shitty. Windows was dead to me. I became pretty addicted to having the latest-and-greatest products, which means I also became quite good at eBay.

I have lost track of how many Apple computers and iPods I owned in the 7 years since I bought my first, but it’s over a dozen laptops, 2 desktops, and probably more than 20 iPods. I kept and used each item for 4-6 months before selling it online and buying a new one in the store. I rarely lost more than $50 on an upgrade, though we did not receive an employee discount. (Told you: I was good at eBay.)

For about 5 years now — since I finished my master’s degree and started a real job — I’ve been using a PC at work. It was fine, but I still had my precious Mac at home. With no time to be constantly buying and selling, and without the tax-free benefit of living in Oregon, I settled in to a nice, loaded MacBook Pro. Then my workplace offered to get me a laptop to use for work, and said I could choose Mac or Windows — score! I chose a Macbook, but whomever ordered it misunderstood my request and ordered a loaded MacBook Pro. Uh, I’ll take it! After a few months of having *two* Macbook Pros in my home (wow) and mainly using the work-owned one (since it was a few years newer than mine), it occurred to me I ought to sell my old one and use the money for something useful. So I did.

And for nearly 2 years, this techie, gadget-loving Mac fan-girl did not personally own a computer. At work, I used my desktop PC. At home, I used my work-owned Macbook Pro. Finally though, it started to weigh on me that I was using work property for personal use. It’s not like I was using it to make money or anything, but it still didn’t seem totally kosher to me. Time to get my own computer again. The problem, though, is that I lost my faith in Apple along the way. I still love my iPod, but I barely use it since my commute is about 5 minutes and I no longer go to a gym. I don’t have an iPhone — iPhones were not available in my region of the country until a few months ago (no AT&T coverage) and they’re still only 3G-capable (Verizon). I don’t have an iPad either because I’ve yet to find a reason.

And honestly, the last few Mac laptops I’ve dealt with have been disappointing. My work-owned Macbook Pro is pretty good, but my parents have owned 2 Intel-based Macbooks and they were both crap. And the service sucked too — when these machines broke down under warranty, my parents were told to bring it to their closest ‘Genius Bar,’ which for them was over 4 hours from their home. My dad bought a Sony Vaio instead. Hah. (My own closest ‘Genius Bar’ location is 300 miles from my home, by the way.) What ever happened to that great mail-in service Apple used to provide?

Again, to make a long story a little shorter, Apple has disappointed me as of late. Additionally, my husband is a very techie guy and isn’t tied to Mac or Windows or Linux or any OS in particular. He’s tied to whatever is efficient and works best for the tasks, and at the best price. I can’t even list all the types of operating systems running now in our home. (Oh, and it also is worth noting that my Mac software products were pretty out of date, so I was not tied to a particular type of computer due to owning a lot of expensive software.)

With that in mind, when I had all but decided on a 27″ iMac, he found me the Lenovo IdeaCentre B520 All-In-One. (That means it’s like the iMac — all of the ‘guts’ are built in to the screen.) 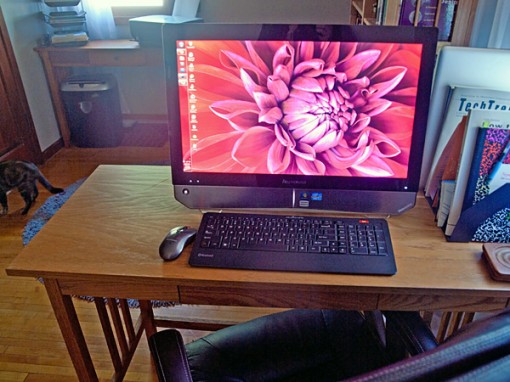 I call it ‘Lenny.’ Here’s how the comparison (versus the iMac I liked) broke down:

Hell yes. Powerful, loaded, relatively inexpensive. I knew from experiences at work that I did like the Windows 7 interface, and Lenovo is my favorite Windows-computer brand too. Sold!

It’s been about 2 months, and I love Lenny. It can do anything. It’s fast and awesome. That 27″ monitor might have been nice, but honestly, 23″ is huge! Especially if you’ve been staring at a 15.4″ laptop screen for years and years. I might get an iPad in the future for portability, but I haven’t decided yet. Right now, I just love having Lenny set up in my office. It is perfect for my dissertation writing, photo editing, and pretty much everything else.

So now I’m a P.C. But I could still be a Mac. I guess I’m O-S-bidextrous. Which way do you swing?

Hi! I’m Nodakademic. (That isn’t my real name though; that’d be a way weird name.) I’m a late-20s academic nut from the always-windy and often-cold state of North Dakota. I blog about my life at Nodakademic.com. I’m also Mrs. Mary Jane on Weddingbee; that’s how I came to know Jenny, though I actually read her blog long before I even knew what Weddingbee was.