This chart, found over at Geeks are Sexy, sure brings back some fond memories… 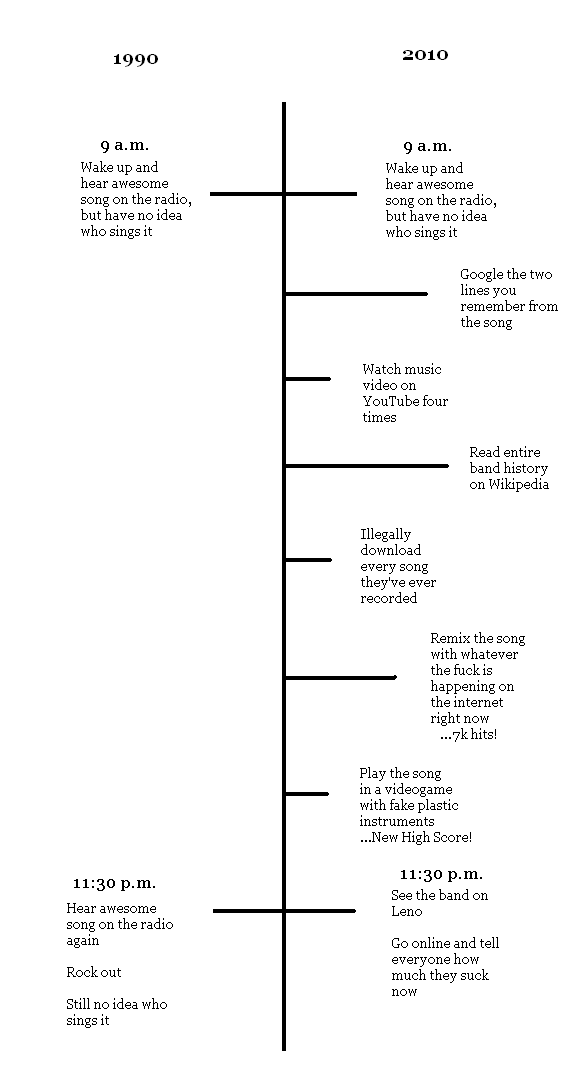 Who knows how many great songs I’ve missed out on over the years because the radio DJ never mentioned the artist, or the song name? And when you ask your friends (“It goes something like duh-nuh-nuuuuuhhhh, da-duh!”) they have no idea what you’re talking about because who can really identify a song from two bars of poorly-remembered melody?

I also remember how I used to sit by the radio, one finger hovering over the “record” button in order to record my favorite tunes on a blank cassette. I got so good at recording songs off the radio that you could hardly identify the ghetto method in which they were obtained. Was recording radio songs onto cassette tapes the first generation of pirating music?

Then there were mix tapes. I was the queen of mix tapes! I made mixes based on mood, messages, genre, beat, tempo…you name it. When I first read High Fidelity I vigorously nodded my head along with Rob’s detailed exposition on the art of making a good mix tape. Mix tapes were slowly replaced by mix CDs, and now, MP3 playlists. I always thought that mix CDs did not have the same heart as mix tapes, and MP3 playlists are not even comparable.

What about you? Does looking at this chart bring back any memories?

P.S. — If I could add one amendment to the chart, it would be the identification of said song with applications/programs such as Shazam. I have Shazam on my trusty Moto Droid and have used it numerous times to identify and discover new songs.

« A Slap in the Face
Educational Chemistry Crayons »