I’m Not Fat; I Just Have a Big Head

Last week we took Claire in for her 4-month checkup. Our pediatrician declared the baby perfectly normal and healthy for her age…but voiced her concern at Claire’s weight gain.

Currently, Claire weighs 14.6 lbs and is 22.75 inches long. While her height remains at about the same percentile range, her weight is now over the 90th percentile!

Our doc asked us how much the baby was eating and how often, and told us not to worry about it too much. However, if Claire cries to be fed again within 2 hours of finishing a 6 oz bottle, we were to try giving her 3 oz of water instead.

I know that Claire is just a baby and that she will probably grow into her weight when she becomes more mobile. But as someone who has struggled with weight almost her entire life (I have more curves than the average Asian and am actually considered overweight in Asia), I couldn’t help but be a bit worried, especially since they say that formula-fed babies are more likely to become overweight as they get older.

J and I puzzled over Claire’s weight the entire way home from the doctor’s office. “How could she be over the 90th percentile?” we asked ourselves. “Look at her — she has some baby fat rolls but no more so than the average baby!”

Then we figured it out. It’s because of her giant noggin! 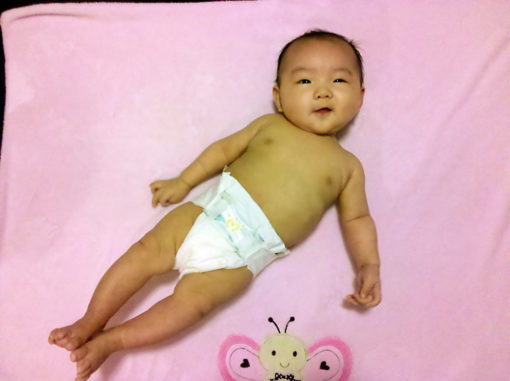 What’s that you say? You think I have a big head? 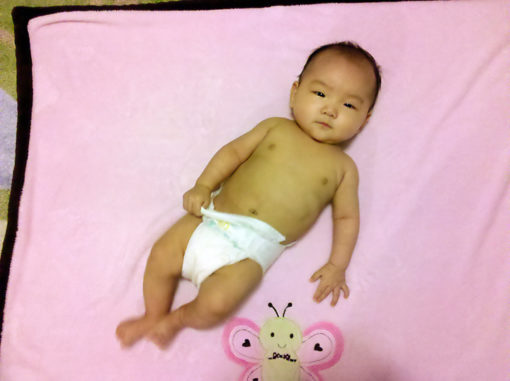 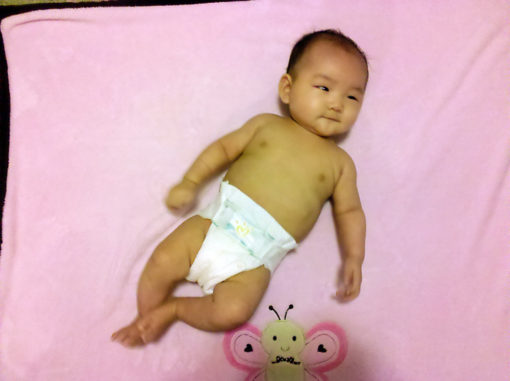 (And before you start judging me for what I’m about to write below, remember that I am Korean. We have a tendency to obsess over head sizes.)

I have always been self-conscious of my giant head. If you think that I’m exaggerating, I can tell you with confidence that my head is larger than anyone else I know…and I only stand at 5’1″. If you’re curious, my head circumference is 60cm. That’s almost 24 inches!

As such, ever since I got pregnant I had been hoping for a baby with a small, or even an average-sized head. Not only because it will be easier to give birth, but so that my children will not have to grow up with the teasing that I had endured.

I breathed a sigh of relief when the nurse first informed us of Claire’s stats right after giving birth, because her head circumference was 34 cm, or the 31st percentile.

But as she grew, so did her head. Today, while Claire’s height remains below 2/3 of babies her age, her weight and head circumference are both above the 90th percentile.

And as you can see in the pictures above, Claire is not a fat baby. She has a slight tummy, but that’s most likely due to the fact that she had finished a 6 oz bottle mere minutes before these photos were taken. So the only likely culprit for her above-average weight is her above-average head size.

And before the “How can you criticize your daughter? She’s just a baby!” comments start pouring in, let me say that I am NOT criticizing her. I am making an observation, or at least trying to think of a reason why her weight seems to be so high for her height when she does not look fat.

J and I actually think her big head is adorable. We are also well-aware that babies’ body parts grow at different rates, so her head may very well be average-sized, or even below the average size a year from now.

And if she grows up to have a big head just like her mommy? Eh, I don’t like that I have a big head but the teasing eventually stopped and I’ve learned to live with it. Besides, my mother tells me that I had a bigger head when I was Claire’s age.