Earlier this week I was helping out at my mother’s dry cleaning store when a woman threw a hissy fit at me.

She had brought in some slacks and a women’s shirt. As I entered these items into the computer, she held up the shirt and said, “I would like this to be charged the same as a men’s shirt.”

“I know, but you always charge more for ladies’ shirts and that’s not fair.” 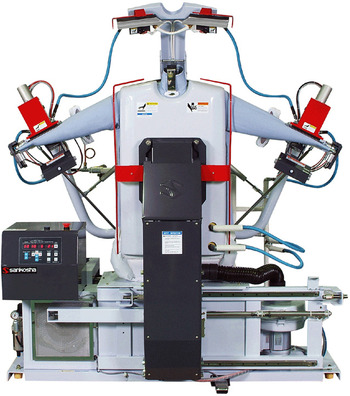 “Well why don’t you buy pressing machines for women’s shirts?”

“As far as I know, no such thing exists.” (This is true — I peruse the myriad of dry cleaning catalogs and magazines my parents receive whenever I’m bored at the store.) “Even if they did, it just wouldn’t make sense economically to buy shirt-pressing machines in various sizes because each one costs thousands of dollars…not to mention the space they would take up.”

By this point, the woman was visibly upset.

“You know, not all men’s shirts are cut the same way!”

“We are fully aware of that fact. That’s why we charge more for men’s shirts that are cut drastically different from other men’s shirts, or for extra small or extra large items that will not fit on the pressing machine.”

“That’s just discrimination! You are discriminating against women, not to mention men with smaller or bigger frames!”

“I’m sorry…that’s just the way we do business. If you are not satisfied…”

“I’m fully prepared to write to my Congressman and demand a law to end price discrimination of this sort!”

I was starting to get pretty annoyed at this woman. “Why don’t you go ahead and do that.”

“And I’ll take my business elsewhere!” She then hurried out in a huff.

The prices that my parents charge at the dry cleaner aren’t out of the ordinary. It is a well-known fact that many times, women’s clothes cost more to dry clean than men’s.

For a price reference, my parents charge $1.75 for a men’s shirt and $5.25 for a women’s shirt. Seeing as how a women’s shirt usually takes 5 times longer to press, I don’t think the price is unreasonable.

As I relayed the story to my parents, they informed me that this isn’t the first time this has happened. They have gotten more than a few complaints about the price discrepancy between women’s and men’s items over the years…however, they feel that it is only fair to charge more for items that take longer to clean and press, and this is how the majority of dry cleaners price their services.

What do you think? Is this discrimination?

I then began to wonder how we would be able to appease this woman, as well as the others who may feel that this is gender discrimination. The only possible solution I can think of is to charge the same for both men and women’s clothes, but raise prices across the board. However, I can’t imagine that all of our customers would be happy with the idea…

Can you think of another possible solution to the problem?

10 Responses to “Is This Discrimination?”