As stated in an earlier post, 2011 was not the best year — financially — for my family.

This does not only apply to my parents. While J and I are by no means poor, we have been on a very tight budget. Yes, we were able to hire a part-time nanny for a few months. Yes, we are able to dine out once in a while. But these luxuries do not come easily, as we have made numerous sacrifices to achieve them (e.g., not purchasing clothes for ourselves for the entire year).

And as much as it pains me to not be able to afford toddler classes for Claire, or not be able to immediately afford a new couch despite the fact that our current one literally has springs popping out (thankfully, the springs are coming out of the bottom of the couch so they do not pose a safety threat), I know that we are the lucky few. I have family members who are about to get kicked out of their home. I have close friends who are struggling with unemployment, mounting bills, and have even contemplated drastic measures like suicide.

Because if you are reading this on your own computer — or even on a computer at work — you are probably wealthier than 90% of the world.

Even now, I feel silly writing out our problems when there are people starving out there.

I guess this is one of the biggest reasons I stopped spending so much time on Facebook in the past year. Yes, I still log in to upload pictures to share with my family, and to keep up this blog’s Facebook page. But I don’t like to hang around much because so many people’s problems seem so petty (#firstworldproblems much?), or the pictures from luxurious vacations and/or frivolous purchases depress me when so many of my loved ones are in financial pain. 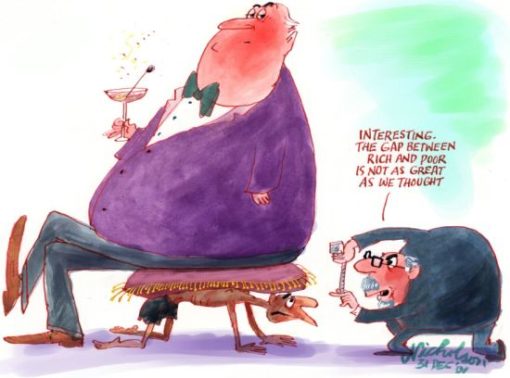 It is no secret that in our current economic climate, the rich keep getting richer while the poor grow poorer…with the middle class dwindling in numbers. J and I are very fortunate that we are able to remain in the middle class, but with the costs of living rising far quicker than our income, we can’t help but feel strained and a bit resentful at times.

Then we come across pieces like this, where those with $700k incomes feel “poor,” or this, where a high-end designer chooses to defile their pieces before throwing them out so that the less fortunate can’t wear them, and I can’t help but feel even more depressed. Not because I am envious and wish for more money and a better lifestyle, but because I want to scream, WHAT THE HELL IS WRONG WITH PEOPLE??!!!

I remember joking to J a couple of months ago that this current worldwide situation of the widening gap between the upper and lower classes is what will eventually lead to World War III. And as much as I said it in a lighthearted manner, I couldn’t help but think that there may be some truth to the statement. Perhaps not a war, but some sort of revolution.

Think about it: throughout recorded history, the widening gap between the rich and the poor have almost always led to big changes. The fall of the Roman Empire. The French Revolution. The Bolshevik Revolution.

I am a bit scared for the world that my girls will be raised in, to be honest.

But there is no use just whining and complaining about it. I have decided that while I cannot control the actions of others, I can at least take some small steps toward helping those in need. As such, I have signed up to be a volunteer at a homeless shelter via my church. I have also decided to donate a percentage of my blog earnings every month. (I wish I could do more and give more, but it’s admittedly difficult with two babies and our own mounting bills.)

How do, or how will, you help?

18 Responses to “More Thoughts on Money, and Small Steps Forward”