You know me — whenever I come across an item that enriches my life, I want to tell everyone about it! So here it is: five more products I’ve been enjoying lately. 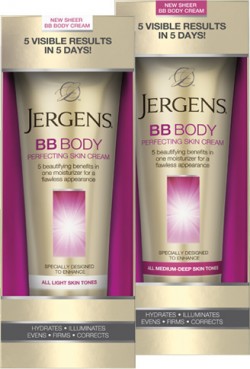 I’ve been reading (and seeing great before-and-after photos) of this cream online, so I decided to give it a try once the weather warmed up and my limbs were no longer covered in thick clothing.

There are two versions of this cream: light skin, and medium-deep skin tones. Although my skin is pretty fair, I decided to get the darker version because I had read that this produces more visible results.

And…I love the Jergens BB Body Perfecting Skin Cream! I apply a generous amount to my legs after showering, and its effects seem to last until my next shower. While the cream is thick, it absorbs and dries quickly (with no transfer to clothes). My skin is soft and more even and just looks better.

I have read that this BB body cream contains trace amounts of self-tanner — I’m not sure if this is true or not — but after about a month’s use, my legs seem slightly darker.

The only thing I don’t like about the Jergens BB body cream is the smell. I’m pretty sensitive to scents in beauty products, and while some reviewers have stated they love the smell, I hate it. It’s not a big deal though, because I just wash my hands immediately after applying, and the scent no longer bothers me. 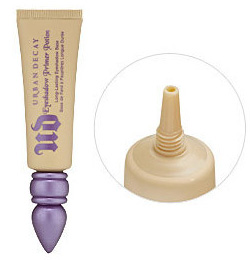 I know that the UD eyeshadow primers have been around for a while and that it is a stable in many women’s makeup collection.

However, I hardly have time to apply eyeshadow anymore so I don’t need an eye primer. What do I use this product for, then?

I had been looking for a good concealer for years. Since I hardly break out, I don’t need to cover up pimples; I require the coverage under my eyes and around my nose.

The Urban Decay Eyeshadow Primer is obviously not meant to be used as a concealer. But because it is formulated to provide light coverage and stay put, it is the ONLY “concealer” that lasts the entire day for me. I am very lucky that Eden’s “matte tawny” color is slightly lighter than my skin tone, which is what you should use for concealers.

If you practice hot yoga, or if you sweat a lot doing an activity that requires a yoga mat, I highly recommend these yoga mats.

It’s a no brainer that your mat can get pretty slippery when you’re contorting your body to unnatural positions in 100°+ temperatures and sweat flows out of your every pore in protest. Most hot yoga studios require a towel on top of your mat for this purpose, and there even exist microfiber towels — like the popular Yogitoes — that are designed to lie on top of your mat and collect sweat.

When I began to go to hot yoga regularly, I purchased one of these towels and immediately noticed how they were superior to the beach towel I had been lugging to class. However, as I began to explore other styles of hot yoga in addition to Bikram — styles that require more movement — the microfiber towel became a nuisance as it kept sliding and bunching under my body.

The Aurorae “Synergy” Yoga Mat is different in that the towel is bonded to the mat. Additionally, it is designed so that the more you sweat, the better your grip becomes! My practice has gotten so much stronger now that I no longer have to worry about what’s going on under my feet.

The Synergy mat dries quickly and is machine-washable as well. It’s an investment, for sure, but completely worth the money in my opinion. 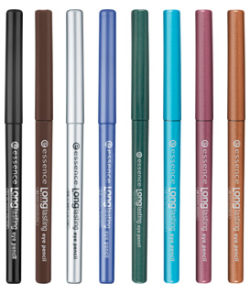 Long-time readers will recall that I prefer long-lasting makeup. And although I am, for the time being, perfectly happy with my Milani Infinite Liquid Eyeliner in Unlimited (to replace my discontinued HG eyeliner, MAC Liquidlast), sometimes I just don’t have the full minute required to carefully apply the thick liquid eyeliner.

And on those days, I turn to pencil liners because let’s face it, they’re the easiest to apply.

I have used pencil liners since I first started wearing makeup at the age of 16, and I’ve probably tried dozens of different brands and formulations over the years. Hence, you know that a liner needs to be exceptional to shoot to the top of my favorites list.

While the Essence Long-Lasting Eye Pencil certainly does not have the staying power of the Milani Infinite or the MAC Liquidlast, it is the best pencil eyeliner I have tried. It glides on easily and lasts a long, long time…even requiring an eye makeup remover at the end of the day. It performs just as well — if not better — than department store brands, and it costs less than $2.50!

That’s right. You can purchase one for $2.49 on Ulta. If my endorsement alone doesn’t persuade you, the price surely should! 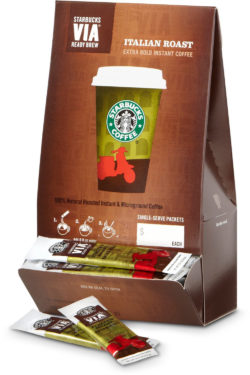 While we have a nice coffee maker at home, I don’t like using it much because I’m the only one who drinks coffee at home. (J gets free gourmet coffee at work.) Instead, I prefer the convenience of instant coffee — in conjunction with our trusty Panasonic Electric Thermo Pot.

The only problem is that instant coffee usually tastes like crap.

My taste in coffee is not too discriminate, so I used to purchase, and experiment with, whatever instant coffee was available at the grocery store. However, I couldn’t deny that whenever I drank store-bought coffee then returned to my instant coffee, I would cringe in disapproval.

That’s when I decided to research instant coffee, and continually found that the Starbucks VIA line usually rated the best.

And I can verify the reviews. Because the Starbucks VIA Ready Brew Coffee in Italian Roast is, by far, THE best instant coffee out there. Even J, the coffee snob, commented with a “Hmm, not bad…” when he first tasted it.