Many of us are aware that South Korea has the highest highest rate of cosmetic surgery per capita (according to a 2012 report by the Economist).

But just how prevalent is plastic surgery in Korea?

And, perhaps more relevant to this discussion, just how homogenous is the standard of beauty in Korea?

These questions, along with the argument over the “westernization” of ideal beauty in Korea — and, as a result, the cosmetic surgery  procedures that seek these features — were hotly debated when Redditor ShenTheWise posted photos of the 2013 Miss Korea contestants for the world to scrutinize. The photos quickly went viral, and it’s easy to see why. Take a look for yourself: 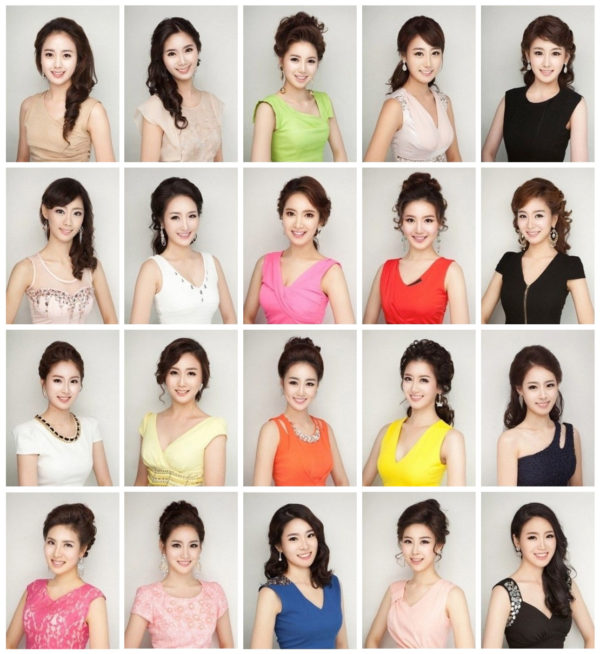 The OP adds these comments along with the pictures:

1) You arent racist. Those women in fact do look unnervingly similar and yes, Koreans think so too. This is because they all get the exact same plastic surgeries and the surgeons follow the same formulas for noses and eyes and everything else theyve had done (fillers, cheek and forehead implants, eye surgery, nose surgery, jaw reduction, breast job, calf muscle job, fat grafting etc). Every single one of them has had nose and eye surgery. Those faces costed those girls thousands. Also dont underestimate makeup, theyve got it caked on in a similar style.

2). Those are called the Korean plastic face look. In certain areas of Seoul, you would think all the women are sisters because they look so similar due to same surgeries.
Koreans cant tell them apart ether. Theyre jokingly referred to as “Samsung Robots”

3). Most korean women dont look like those women. Not anywhere near actually. Most dont have the money to fund their body dysmorphia. Some actually have self esteem. Without the plastic surgery, korean women are very diverse looking and easily can be told apart. The surgery takes away their individuality and uniqueness and its sad. Most are beautiful without it but telling them that their korean ethnic features are infact lovely is as effective as screaming at a brick wall. They wont believe you because theyve been brainwashed to think westernization of their features is superior, i dont think they want to look white, but a mix of white and asian and definitely less Korean.

4). Its weird to see the real plastic ones with kids. The kids look adopted. I always wonder how they explain to their kids later on why they look so different, “Dont worry when youre old enough we will have a surgeon fix the ugly parts just like mommy did!”. And yes many korean men DO ask for old pics before getting serious about a woman.

I have stated in the past that I have nothing against plastic surgery. My bone of contention with this story is that the Korean society — a highly competitive environment that values conformity — puts pressure on its women to look the same.

And if you don’t conform to this standard? Well, tough luck. Or, just get surgery!

I’m reminded of the time my mother informed me I have the type of face that is considered beautiful by the older Korean generation, but not the current.

I know that the issue isn’t just isolated to Korea; who can forget the story of the Chinese man who sued his wife for hiding her surgeries from him — thereby giving birth to a baby he found to be “horrifically ugly” — AND WON! 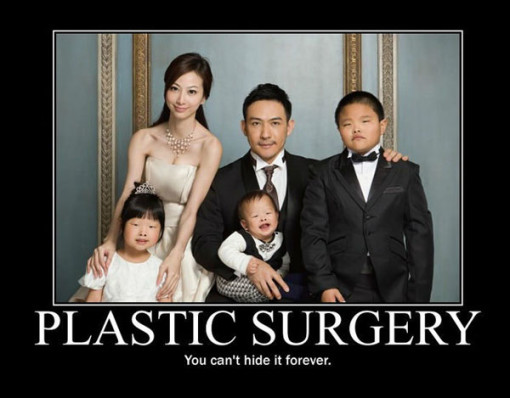 Not the family in question, but a very popular photo among Asians.

I have just learned via KoreAm that the photos are NOT of Miss Korea 2013 contestants, but of the Miss Korea Daegu contest. (Daegu is a city in southern Korea, and coincidentally where I was born and lived for the first 7.5 years of my life.)

The article raised a good point, which I deserves mention on this blog:

While it’s startling to see how similar the contestants look and perhaps it’s easy to get get caught up in online rants about how Korea is too materialistic and shallow and are besmirching the good name of beauty pageants everywhere, it makes more sense that a handful of contestants in a regional contest will look similar due to going to the same doctor rather than Korean plastic surgeons across the country working with a universal manual on current beauty standards.

What do you think? Does this clarification make the story any more acceptable/tolerable?

« The Other Rules of Fight Club
The Nicholas Cage Movie Matrix »