The Internet as Manhattan Neighborhoods

Amanda Peyton, the creator of geo-blogging site MessageParty, has designed a map of internet services based on Manhattan and its neighborhoods: 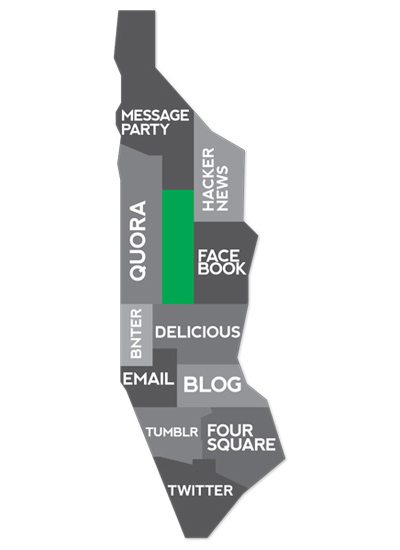 The reasoning behind each placement is as follows:

Foursquare + East Village: The roots of the service were in the EV and the best foursquare tips are still found here; bar-hopping, hypersocial, where-you-at mentality

Tumblr + West Village and Meatpacking: Coolness to a fault

Blog + Gramercy: I currently live in this neighborhood, so it was most fitting to place it there

Email + Chelsea and Times Square: Large, unmanageable, swelling, but ultimately the pulse of everything

Facebook + Upper East Side: The center of the “establishment”

MessageParty + Washington Heights: Scrappy, and how could I miss an opportunity to post this video on my blog?

I would have asked which neighborhood(s) Google would match, but I think it would take up too much (oftentimes unnecessary) space.

For more on the map, including the inspiration behind the design and where you can obtain your own, hit up Amanda Peyton’s blog.

« The Development of the Camera [Infographic]
Household Help »

One Response to “The Internet as Manhattan Neighborhoods”