I have a confession to make.

Before I became a mother, I used to look down on SAHMs with housekeepers and/or nannies. “You stay at home all day,” I thought to myself. “Can’t you clean when the baby’s sleeping? And why would you need help raising a kid?”

This, like many other pre-conceived notions of motherhood, was thrown out the window as soon as I became a mother myself. Because being a SAHM is the hardest job I’ve ever had. Because I really don’t know how moms with 2+ young kids do it (single moms have my utmost respect).

Because, when you think about it, the nuclear family living separately in a household by itself is a fairly new concept, and for most of human history women always had others around to help raise the children, cook, do household chores, etc.

I couldn’t help but be reminded of this as I read an article titled “Never Mention the Housekeeper” in NYTimes’ Motherlode. The column actually opens with the mention of one of my favorite literary families — the Marches of Little Women fame — and notes how they, despite the fact that they were so poor that they could not afford Christmas gifts, still managed to employ Hannah, their live-in servant.

The article goes on to quote Meagan Francis of The Happiest Mom, who wrote:

The Marches weren’t unique. Going by the extensive reading of free and/or inexpensive classic novels I’ve had on my Kindle over the past year, many — perhaps most — “ordinary” families had some kind of hired help back then, even those who weren’t very well off: whether it was a teen girl helping out in the kitchen, a boy to work on the farm or a local woman “taking in” the wash or even live-in cooks, nannies and other servants, having “help” was just an accepted fact of life among the middle classes.

Things have changed pretty dramatically in the American home over the last century or so — economically, socially and technologically. And while families in the highest income brackets may still matter-of-factly employ full-time household staff, for the rest of us hiring outside help has become more … complicated. We wonder if we seem snobby, entitled, spoiled? Are we exploiting the person we’re hiring? And … hey, with all these modern advances, shouldn’t we really be able to do it all, all by ourselves, if we maybe just tried a little harder?

But while our jobs are probably less physically demanding than our great-great-grandmothers’ were, that doesn’t necessarily mean our lives are simpler. With more choice comes complication and busy-ness, and, I think, less of a feeling of knowing when we’ve done “enough.” Plus, we’ve got so many roles to grapple with, we fear shortchanging one area will compromise our identities: can I really call myself a ‘homemaker’ if I don’t do all the work myself?

Second confession: soonafter we discovered that I was pregnant again, when the morning sickness and fatigue seemed neverending, we went ahead and hired a cleaning service to come in once a week so that I would be relieved of at least one duty.

And it has been one of the best decisions I have made as a mother.

I no longer stress over the state of our bathrooms. I no longer spend Claire’s naps — time that I could and probably should be resting — tidying up the house. I enjoy my time with my daughter more now that I am not thinking about the next item on my “to clean” list.

The thing is, I have not been feeling much better in the second trimester. The nausea has subsided somewhat, but it has been replaced with migraines and insomnia. It’s difficult enough taking care of an infant when you are pregnant, but it’s doubly difficult when your head is painfully throbbing with every beat of your pulse.

So we’ve decided to get a part-time nanny instead, and as soon as we find one we will discontinue the cleaning service.

I still feel a bit of shame saying (writing?) this. Like Ms. Francis says, shouldn’t I be able to do this all by myself if I tried a bit harder? Am I failing my family as a SAHM?

And that’s when my own mother steps in to remind me that she — the greatest mom ever in my eyes — had full-time help in the form of my grandmother who lived with us until she passed away. 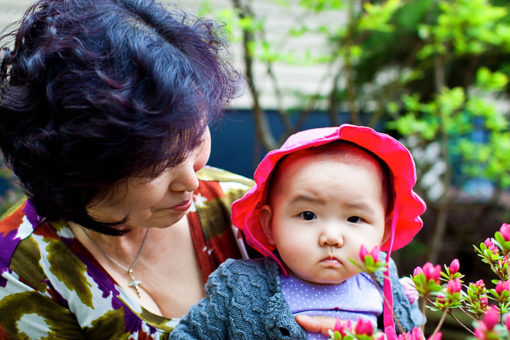 Even J’s mother had help — J’s aunt and his grandmother who lived with the family — when the children were young.

And both mothers continually remind me that I will need even more help as I get bigger, and eventually give birth to BebeDeux.

What is it about household help that touches such a nerve? Is it envy that others can afford more, or outrage that domestic workers are being exploited, or a belief that one’s own mess is one’s own responsibility, that makes critics jump? Is it guilt at not being able to handle it all, or fear of being the exploiter, or sensitivity about looking “entitled,” that makes so many employers defensive?

In other words, when did it go from being something Marmee assumed was part of managing her life, to something Ms. Francis feels the need to apologize for?

Does the modern nuclear family have it wrong? Were we better off when extended families lived under one roof, when it literally took the village to raise a child?