The Science of Star Wars

Physicist Andy Howell recently gave a talk about the science of Star Wars — yes, the actual science behind, the inspiration for, the data that supports, and the ‘how’s and ‘why’s behind the wonders of the SW world! — and wrote up a summary for Ain’t It Cool.

This is so nerdy that I couldn’t help but stay up ’til 2am, devouring the details.

For example, did you know that training remotes (the floating robotic orb Luke uses to practice his lightsaber skills) are a reality? And that they’re flying on a spaceship right now???!!!!!

In 1999, MIT professor David Miller showed his students STAR WARS, and when it got to the part about the training remotes, he said, “I want you to build me some of those.” They and subsequent researchers came up with these things called SPHERES that are being tested on the International Space Station. They float because it is weightless on the ISS. And then they maintain their position and move around by shooting jets of compressed air!

Then there’s this jaw-dropper: 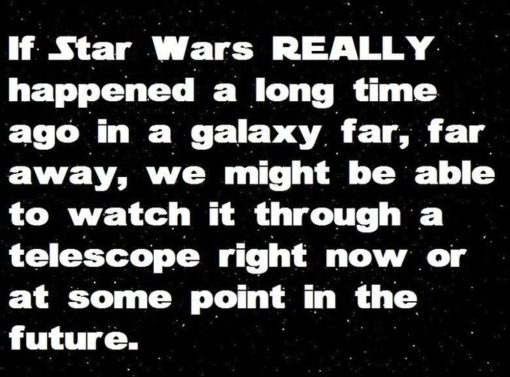 And you can read the calculations behind the statement at the end of the article!

I think it goes without saying that Copernicus explores The Science of Star Wars! is a must-read for all Star Wars geeks. Go bookmark it now!!!

« Amazon Gift Card Giveaway! [Win One of THREE...
High Expectations [The Perils of an Overactive... »

One Response to “The Science of Star Wars”