Can I just say how much I love the Thursday Next books? I think this may be about the tenth time I started the series again, yet I still find something new and amusing every time.

An excerpt from Wikipedia:

Thursday Next is the protagonist in the series of novels by Jasper Fforde. Thursday is an agent with the Swindon SpecOps department 27, the Literary Detectives or LiteraTecs, which means she investigates cases that seem rather bizarre but are perfectly normal in this parallel world such as illegal book trafficking, bootleg poetry etc.

Thursday lives in a parallel late-eighties, where England has been fighting the Crimean War for more than a hundred years with a Russia that still has a Tsar, there is no United Kingdom, Wales has become the “People’s Republic Of Wales”, England is a republic with President-for-Life George Formby as head of state and apparently Operation Sealion was carried out successfully. In the world of Thursday Next, literature is a much more popular medium than in our world.

Did you read that last sentence? “In the world of Thursday next, literature is a much more popular medium than in our world.” A world where thousands of people make pilgrimages to gawk at original manuscripts. Where participating in Shakespearean theater is considered a fun and trendy event. Where the kidnapping of one of the most beloved figures in literature, Jane Eyre, would be declared a national tragedy.

Don’t you love it? Well, if you’re a true bookworm like myself you would.

There are four books in the series: The Eyre Affair, Lost in a Good Book, The Well of Lost Plots, and Something Rotten.

If you’re at all familiar with literature and is an avid reader, you would love the Thursday Next books as well. There are numerous references, puns, and satirization of famous works and authors. In addition, the world that Fforde has webbed around Thursday is so imaginative and outrageous that you cannot help but marvel at his genius. 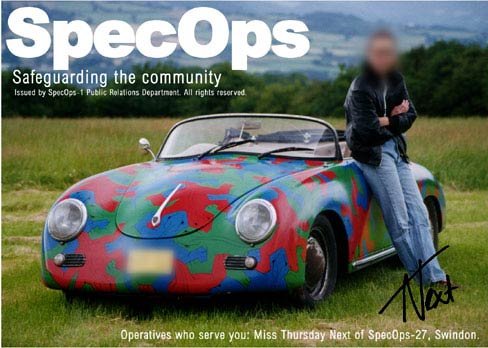 Fforde has written two spin-offs of the Thursday Next series: The Big Over Easy and The Fourth Bear. While I don’t believe they are as good as the Thursday Next books, they are still very entertaining. The first book is a mystery based around Humpty Dumpty’s fall, and the second deals with the Gingerbread Man.